How the Brain Navigates to a New Restaurant

Imagine a new restaurant just opened downtown and you want to check it out. You hop on the bus and take it a few stops. Once you get off, you have no sense of where you are or how to get to your destination.

You look around to collect your bearings: Camden Yards is to your right, and you see the Bromo Seltzer tower in the distance. You understand where you are and make your way to dinner, and on your way back you find the exact location, knowing that it is the bus stop. How did this internal mapping occur? Researchers, led by postdoc Joe Monaco under the mentorship of Jim Knierim, a professor of neuroscience at The Johns Hopkins University, have found that this mapping is due, in part, to the initial scanning behavior that allowed you to gather your bearings once you got off the bus. 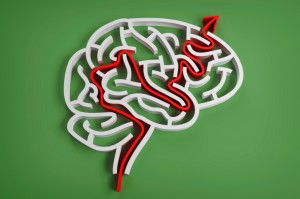 How brains create an internal perception of the environment of the external world uses the hippocampus — a seahorse-shaped structure within the brain — and specific “place cells.” These cells will only fire when they recognize that small region of the external world. They are thought to create a spatial framework onto which memories are added, similar to how one hangs clothes on a clothesline.

Though the discovery of these cells was a monumental milestone in the field of neuroscience — in fact, the person who discovered them was one of this year’s recipients of the Nobel Prize — how the place cells acquire their specific area of activation, or “place field,” is unclear.

Johns Hopkins scientists looked into1 exactly this by training rats to walk around a circular track while researchers recorded from their hippocampi. They also recorded the animals with a video camera to match behavior with brain activity. When they analyzed the data, they found cells that were active only after the animal paused, looked around, then resumed moving. On initial laps, a cell was not active on any part of the track, but once the animal scanned its environment, that cell was active in that same location for the rest of the day.

This is very similar to when you looked around at the bus stop, creating a new part of your internal map. Without looking around, these cells would have remained silent, and neither you nor the rat would recall the exact position if it happened again.

The ability to recall environments and what happens where is an incredible function of the nervous system. Without this ability, we would only be able to navigate one environment at a time and would fail to gain our bearings as we pass into new locations. By taking the time to look around a new environment, you’re giving yourself the resources your brain needs to update your internal map.