As 2014 ended, Medscape released “The Year in Medicine 2014: News That Made a Difference.” Among the notable stories were the Dr. Oz Senate hearings, in which the celebrity doctor was censured for “perpetuating weight loss fraud.” He defended himself, saying he believed in his products, though still admitting the products’ claims were not backed by scientific evidence.

A prospective observational study1 recently published in BMJ found that in 40 episodes of The Dr. Oz Show, existing evidence contradicted 15 percent of the host’s claims, while 39 percent weren’t supported by scientific evidence.

Though the validity of popular health celebrities such as him might be easy for us as scientists to disregard, we would be remiss to simply shake our heads and ignore the problem. Much of the lay public relies on personalities like Dr. Oz for their health information, and last year he attracted over 3 million viewers a day. Instead of simply ignoring the issue, we could use this information to effect positive change. 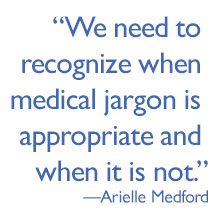 As Johns Hopkins University School of Medicine students, we are in the unique position of being able to bridge the gap between the language of the lay public and health professionals.

When I came to Johns Hopkins, I didn’t know what a hernia was. Nor a hemorrhoid. Nor a hemorrhage. Really, it seemed medical H-words were all made of foreign stuff.

Yet now I am in my fourth year, spouting a vocabulary my first-year self would have registered as not unlike Flemish. And the truth is, I often forget how much I have learned. I was reminded of this recently while teaching a group of first years, and one commented on how much information I seemed to have packed into my brain. She said the system must really work if I was anywhere near her level when I started. I remember feeling the same way toward my upperclassmen, and yet I had not realized I had crossed to that other side.

It is this inherent transition that we need to capitalize on: We need to remember what it was like before we stepped over to the “informed scientist side.” We need to recognize when medical jargon is appropriate and when it is not.

Please don’t get me wrong: I love the intellectualization of medicine. I love knowing and using the obscure vocabulary while rounding outside patient rooms, but as soon as we walk in, that language has to change. It needs to be clear and facilitate better patient education. Simple language can be used to teach concepts, while detailed terminology can be left outside the room.

Dr. Oz and his contemporaries may be misinforming, but their popularity among the general public means they cannot be overlooked. By speaking at a basic level, they appeal to the need for an accessible means of medical communication.

Instead of simply shunning Dr. Oz, let’s learn from him.

Let’s be encouraged to educate our patients in simple language. But this time, let’s give a message based on evidence-based medicine and clear, appropriate clinical intention.