What do faulty brakes on a car and cancer cells have in common? For one, cancer cells have found ways to evade checkpoints that the body’s cells use as brakes to stop them from dividing out of control. By this same analogy, the accelerator in a cancer cell is always pushed to the floor, and the brakes are ineffective, causing cancer cells to multiply uncontrollably.

Though chemotherapy and surgery have been treatment staples for decades, they are not without unwanted side effects, expenses and resistances, in which the cancer cells find ways to circumvent the treatments. Therefore, instead of using exhaustive and expensive chemotherapies, what if doctors could use the patients’ own immune systems to fight cancer? 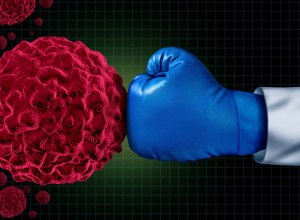 Dubbed Science magazine’s Breakthrough of the Year1 in 2013, cancer immunotherapy offers new hope for combating difficult-to-treat cancers by invoking the power of the patients’ own T cells and B cells: the body’s natural immune defense mechanisms.

As early as the 1990s, biologists in Japan found that T cells have a brakelike mechanism that prevents their aberrant activation. This molecule, known as programmed cell death protein 1, or PD-1, is a protein expressed on the surface of both T cells and naive B cells. Along with that, other reports published around the same time showed that drugs inhibiting PD-1 released this brake on T cell function and subsequently overcharged the immune system.

However, the potential power of these immune checkpoint mechanisms wasn’t recognized until Drew Pardoll, M.D., Ph.D., of The Johns Hopkins University began using PD-1 inhibitors in the clinical setting. Specifically, in a clinical trial he pushed for, cancer patients with refractory disease treated with PD-1 inhibitors saw their tumors shrink.

A year after immunotherapy gained its Breakthrough of the Year moniker, Suzanne Topalian, M.D., director of the Melanoma Program and professor of surgery and oncology at Johns Hopkins, helped pioneer and solidify the field of immunotherapy in cancer treatment. Recently listed as one of Nature’s Top 10 people of 2014, Dr. Topalian is paving the way to make these treatments a reality through clinical trials she initiated at Johns Hopkins using the PD-1 inhibitor nivolumab in partnership with Bristol-Myers Squibb. Having completed a promising trial of nearly 300 patients that was published in the New England Journal of Medicine, Topalian found that nivolumab was effective in combating treatment-refractory lung cancer, melanoma and kidney cancers.

Most recently, a follow-up phase 3 clinical trial demonstrated that the PD-1 inhibitor is superior to chemotherapy, with significant improvements in overall survival and progression-free survival in melanoma patients. This is particularly encouraging given that lung cancer and melanoma remain some of the most deadly cancers to treat today.

Doctors and researchers have barely scratched the surface of immunotherapy’s potential, and more trials and research are currently being conducted on advanced cancers that were previously thought to be untreatable. Nevertheless, researchers such as Pardoll and Topalian are proceeding cautiously yet optimistically as the landscape of treatment options broadens for cancer patients with advanced disease.