How do musicians know how to move their arms and fingers — and in some cases, feet — to create beautiful chords and harmonics? How are athletes able to acquire skills that make them so awe-inspiring? How do humans generally learn a motor skill and learn how to control all of our limbs in a coordinated fashion? These are the questions that a recent review, published in Current Opinion in Neurobiology and led by researchers at the Behavioral, Learning, Animation and Movement Laboratory (or BLAM Lab, for short), sought to answer. 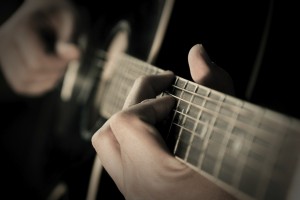 The review looked at an often-used paradigm in motor learning, in which a person is asked to make a quick movement repeatedly. Sometimes, during the movement, the arm is pushed out of the way, either virtually or physically, and the participant has to learn to move his or her arm in such a way that the target trajectory is maintained. Generally, people are able to learn this new motor skill easily and within a few experiences with the perturbation.

Although this seems very simple — move hand in opposition to disruption — the review, led by biomedical engineering Ph.D. candidate David Huberdeau, argues that there is a wealth of evidence to suggest this behavior is carried out by multiple mechanisms occurring in parallel. The authors came to this conclusion after pouring over many results from experiments across many labs and determined that there are at least two fundamental components to this motor learning: a fast, transient learning curve that rises quickly but decays quickly, and a second, long-term curve that is slower to rise but is maintained for longer. Together, the two form an overall learning curve that is identical to the learning curve seen in experiments.

This idea of multiple mechanisms underlying one behavior has many implications not just for basic science of learning and memory, but also for therapeutic options. Imagine you were to lose the ability to move your arm, perhaps due to injury. To regain control and relearn how to skillfully move your limb through space, you would need to act in the short term to initially relearn the movement, but you also want to act on the long-term learning mechanism so that what you learn during a physical therapy session would be retained.

Of course, even these two parts are an oversimplification, but the current review put forward by Johns Hopkins scientists has paved the way for future experimental design. Hopefully, because of efforts like theirs, we can continue to learn about the many parts that need to function in harmony to create complicated processes, such as skilled movements.