I remember the day I first met Carolina Montano, a fellow student in the Johns Hopkins M.D./Ph.D. program. It was toward the beginning of my first year in medical school. We were both at a dinner for M.D./Ph.D. interviewees, and, as with many conversations between medical students, we inevitably began to discuss our classes. 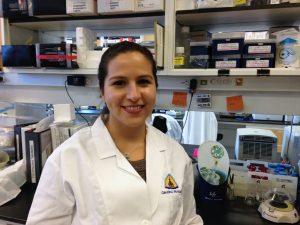 Carolina was talking about her second-year lectures: “I am amazed by how much new information we can learn every single day!” Then, she and several second-year students began an animated conversation about one of the diseases in their lectures. I was immediately impressed by how much information Carolina seemed to know and by her enthusiasm for medicine. More recently, I have witnessed this same passion in a scientific context; we share a research interest in the topic of neuronal epigenetics.

Carolina was born in Barranquilla, Colombia, and came to the United States at the age of 20. Although she had attended three years of medical school in Colombia, she and her family were forced to flee to the U.S. under political asylum. When she first arrived in Florida, her English was poor. Hoping to improve her chances of returning to medical school one day, she enrolled in English-as-a-second-language classes at Miami-Dade College while working odd jobs.

Encouraged by her mentors at the community college, Carolina enrolled at Brigham Young University to study neuroscience and molecular biology. She was able to join a lab her sophomore year and increased her exposure to different techniques and laboratories by spending her summers doing research internships at Mayo Clinic and National Institutes of Health (NIH).

Although Carolina is still at the beginning of her career, she already serves as a role model, especially for young Hispanic females interested in science and medicine.

“I love talking about science and teaching, to children and adults alike, as scientific knowledge is a powerful tool to live a better life and create a fair society," Carolina says. "People empowered by knowledge can make better decisions about their health, that of their children and the representatives they elect to lead them. Latinas are underrepresented in science and medicine, and if I can help inspire anyone to pursue the physician scientist path, I am happy to help them get there.”