Progeria Effects in Cells Improved with an Antioxidant Found in Broccoli

The famed Spanish conquistador Juan Ponce de Leon once traveled to the New World in search of the mythical Fountain of Youth. Hundreds of years later, we are still fascinated by youth and aging. Though not on a quest for a source of youth, scientists today are seeking to learn about the aging process in hopes of slowing down abnormal accelerated cellular aging for patients with Hutchinson-Gilford progeria syndrome (HGPS). 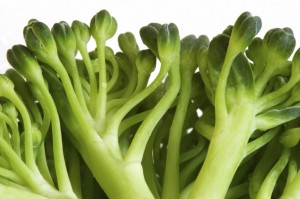 Hutchinson-Gilford progeria syndrome is a rare genetic disorder that leads to dramatic, premature aging beginning in early childhood. Children with progeria display a multitude of symptoms related to aging, some of which increase the risk for life-threatening conditions.

Progerin and the Antioxidant Sulforaphane: Can it Help Reverse Progeria?

The most common causative mutation of HGPS is found in the LMNA gene and results in a defective protein product called progerin. In HGPS cells, progerin accumulates in the cells, which affects the structural integrity of the nuclear envelope and ultimately leads to early cell death. To put the brakes on cell death and aging in progeria, scientists have mainly concentrated on blocking the formation of progerin with chemical inhibitors. But another potential avenue for therapy that’s yet to be investigated fully is the removal of the defective progerin protein in patient’s cells.

In fact, that’s exactly the interest of Karima Djabali and her team from Columbia University. In their recent paper, they looked at the protein profiles in both HGPS-derived fibroblasts and normal dermal fibroblasts. While progerin was detected in normal cells, the levels of this defective protein were increased ten- to twentyfold in HGPS cells. With this result, the researchers asked whether the degradation machinery in HGPS cells was also malfunctioning. Indeed, in HGPS cells, the proteasome activity was significantly lower. In effect, normal and HGPS cells both produce a rogue protein, but in HGPS cells the “waste removal” mechanism is also faulty. This leads to an accumulation of this protein in the cells and induces early cell death.

Naturally, the research team looked for compounds that would enhance the proteasome activity of the cells in order to remove progerin faster. They treated HGPS cells with a compound known as sulforaphane, an antioxidant found in cruciferous vegetables, such as broccoli sprouts. Sulforaphane-treated HGPS cells displayed significantly higher proteasome activity, lower progerin levels and improved cell growth. In addition, sulforaphane treatment also lead to more efficient DNA repair in HGPS cells, reducing the levels of DNA damage present in these cells.

If removing the mutant progerin could produce such a dramatic change in the HGPS cells, the researchers wondered if the rescue could be enhanced by simultaneously blocking the formation of progerin and preventing its accumulation. They treated HGPS cells with sulforaphane in conjunction with lonafarnib, a chemical inhibitor. Preliminary results indicate the effects could be synergistic, but the team concluded that further drug titration studies are necessary to determine the optimal combination.

Overall, the sulforaphane treatment was reported to rescue the effect of the mutant progerin protein in the HGPS cells. As an antioxidant, sulforaphane is known to inhibit the oxidation of molecules, thereby ameliorating cellular damage. With further research, sulforaphane and other antioxidants could become potential treatments for patients with progeria.