Summer in Baltimore means many things: outdoor movies on Federal Hill, different fairs and festivals throughout town, and daytrips to Ocean City are just a few of the diverting events available to residents.

After you’ve wiled away the sun-filled hours with these numerous summer pastimes, you may be tempted to head in for the evening. But stay outside a bit longer and you’ll be able to witness arguably the most agile mammals: bats. 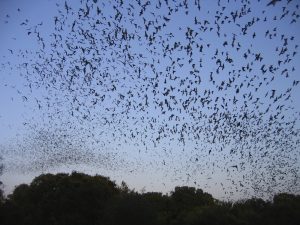 The big brown bat found throughout North America is an aerial hunter deftly flying through the air capturing insects. Bats are the only mammals capable of true flight, but how is it that they are so adept at maneuvering through the air? A recent report led by Johns Hopkins psychology and brain sciences professor Cynthia Moss and Ellen Lumpkin of Columbia University sheds light on this question.

Their results, published recently in Cell Reports, build on the previous finding that tiny hairs on the bat wing are integral for normal flight. When those hairs are removed, the animal becomes less agile in air. To test whether the hairs were responsible for the transmission of information from the periphery to the brain itself, the authors used incredibly small electrodes to record neural activity. To simulate the airflow passing over a flying bat, air was puffed over the wing, and activity in the somatosensory cortex — a brain region responsive to touch — was measured. They found that not only was there increased cortical activity when air was puffed over the wing, but removal of the hairs on the wing also
dampened the response. These results are consistent with the idea that the hairs on bats’ wings serve in neural processing as they fly.

Interestingly, the authors also discovered a unique innervation pattern in the bats’ wings. By injecting a virus into the animal’s wing, the researchers visualized the innervation to the spinal cord. In humans and other vertebrates, there is strict patterning such that the nerves of the upper body, like from a hand, reach the spinal cord above where the nerves of the lower body, like the big toe, reach. In the bat, however, there is an atypical innervation pattern that the authors suggest is due to developmental origins of the wing. How this atypical mapping is used by the animal to direct flight, however, is still unclear.

Taken together, these findings offer insight into how the bat is able to perform such aerial acrobatics and hunt so efficiently on the fly. Future studies are needed to determine how other species of bats have adapted to make such maneuvers and to see how evolutionarily conserved these results are.