Making a CASE for Sexual Education

In Baltimore City, teen pregnancy is significantly higher than the Maryland average, with 66.4 births per 1,000 teens ages 15 to 19 in 2007, compared to 33.4 births per 1,000 teens statewide [i]. Baltimore also has a significantly higher rate of sexually transmitted infections (STIs) than the state of Maryland [ii], and teens represent 3.3 percent of all HIV cases in the city [iii]. To address these issues, The Johns Hopkins Urban Health Institute, the Healthy Teen Network, the Baltimore City Health Department and the Johns Hopkins Center for Adolescent Health recently published a “Strategic Plan to Reduce Teen Births in Baltimore City.” Their first recommendation: to increase access to “evidence-based sexuality education.” 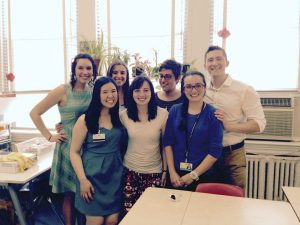 In an effort to complement policy-based changes to sex education curricula, the Johns Hopkins student community decided to address the problem at a grassroots level: the schools of medicine, nursing and  public health teamed up to create CASE: Community Adolescent Sexual Education. CASE is different from traditional sexual education, in part due to its focus on middle school students.

“This year, the U.S. Department of Health and Human Services awarded the Baltimore City Health Department funding for sexual education for middle school students for the first time, but it’s a one-time grant,” says Kristen Lee, a medical student in charge of coordinating CASE this year. “People face decisions regarding sex and their sexuality as early as middle school, and it’s important to have the information early.”

Although CASE matches the national standards of sexual education, it doesn’t stop there. “CASE is dedicated to providing comprehensive and factual sexual education of students, making sure that they get all the information they need. We address all the issues around sex, including relationships, decision-making and consent,” says Oliva Barry, another medical student coordinator.

The curriculum is constantly updated and was rewritten two years ago by students in the school of public health. In addition, the instructors undergo a training session before they go into the community, including a talk from an obstetrics and gynecology resident, with updates on both STIs and methods of contraception.

CASE is an eight-week program designed to be comprehensive and interactive. The classes start with the basics — anatomy, puberty and the menstrual cycle — allowing the students and instructors to build a relationship before delving into more difficult topics, such as LGBTQ identity and consent. The program has been a success thus far, expanding to four schools this fall, with almost 50 educators for 280 middle school students. Moreover, CASE recently received a grant from the Johns Hopkins Alumni Association.

“We teach at the same schools, and teach both seventh and eighth grade. They get bored seeing the same curriculum again a year later, so we want to give them more in-depth information on these issues and include things like body image. We want to give them a better framework for decision-making as well,” says Barry.

“They’re the heartbeat of the program; we’re so grateful for what they do,” says Lee of the instructors.

“This takes a tremendous amount of dedication,” adds Barry. “We hope we’re providing students with tools they can use for their own life to make powerful, healthy decisions — we hope it’s invaluable.”