Heart failure is a disease that effects millions of Americans, costs billions of dollars to manage, and relies on great coordination between health providers and patients. Further, managing the disease in order to prevent exacerbations is a challenge in and of itself. 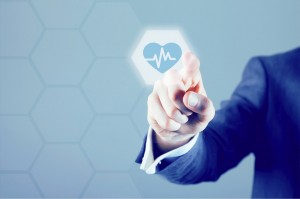 To date, the tool that patients at home often rely on is their scale — if they’ve gained a significant amount of weight over a brief period of time, they know their heart is struggling. Yet, the scale often can lag behind symptoms, and the weight gain becomes only evident after the patients are short of breath and require urgent care and hospital admissions. Clearly, there is a disconnect between the initial struggle of the heart — known as hemodynamic compromise — and the eventual clinical manifestations (shortness of breath and weight gain).

Dr. Harry Silber, a cardiologist from Johns Hopkins Bayview, aims to change how heart failure is managed at home. He has invented a hand-held device that can pick up on subtle hemodynamic changes that may prove to help patients better manage their heart failure. A recent publication in BMC Nephrology shows that the device is sensitive enough to pick up fluid shifts in patients on hemodialysis. Further, Silber has been invited to share his current data at a national cardiology conference that showcases the hand-held device’s sensitivity in predicting a patient’s left ventricular end diastolic pressure (LVEDP). It is well known that LVEDP rises significantly during heart failure, long before patients become symptomatic and have obvious weight gain due to the congestion. However, this “gold standard” for accurately measuring heart strain during heart failure could only be obtained through invasive procedures, until now.

The hand-held device utilizes a well-known medical technique that is traditionally used to predict one’s volume status: the Valsalva maneuver. Named after a 17th century Italian physician, the maneuver requires a forced exhalation against a closed airway (both mouth and nose closed). In normal patients, the Valsalva maneuver induces a predictable hemodynamic response - an immediate spike in blood pressure followed by a concurrent decrease. But in heart failure patients, this decrease in blood pressure will never occur because of the extensive fluid congestion already present in their chest. However, the use of the Valsalva maneuver clinically remained under-utilized because of a lack of consensus on how to standardize the maneuver for patients. Silber’s device, however, easily bypasses these issues.

This new hand-held device has an interactive screen on it that coaches the patients to deliver the accurate amount of expiratory pressure for 10 seconds. During that time, there are continuous waveform readings, called photoplethysmographs, sent from a patient’s finger to the machine. The waveform changes during the maneuver help estimate the patient’s LVEDP non-invasively.

« Words and Their Stories: The History and Future of Two Spirit Communities » Recent NIH Funding and Moonshot Initiatives: Are they They Helping or Hindering?