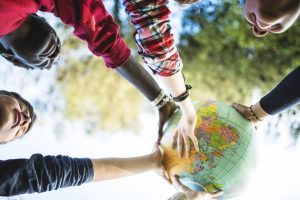 Shuohao Sun is one such international student. Now entering his sixth year in the Department of Neuroscience, Sun comes from Tsinghua University in Beijing, a member of a group of prestigious research universities in China called the C9 League of Universities. When asked how universities in China are different than in the U.S., he noted, “In China, top universities are not private,” a major difference from many top schools here in the U.S. He also described how classes were much more formal in China, with less discussion or interaction, and how testing was always by short-answer exam, rather than essays or projects.

Discussing some of the positives of both systems, Sun remarked: “I think education in China can provide more systemic knowledge. Here, I feel students have more freedom to pursue their own academic interests and are sort of treated more equally by their professors. For example, it’s never appropriate for students to address professors by their first name in China.”

Maxime Chevee, a second-year student in the Biochemistry, Cellular and Molecular Biology Graduate Program, hails from France, and she describes a different graduate system as well. “In France, we are asked to specialize straight out of high school, which I really didn’t want to do and was one of the factors that pushed me to come here. I hear that Ph.D. in France is a lot more supervised and you are less independent.”

Chevee does describe one benefit, saying, “for higher education, obviously the big advantage of France is that you have some options that are free. There is the notion out there that it’s all free, which is absolutely false, but for example, training in law and medicine are free.” However, Chevee explains, the French system essentially locks you into a career as early as 17, forgoing the broad education found at universities in the U.S. “So I really support the American version of higher education, where I think there are many more opportunities for you to succeed.”

Sun and Chevee spoke of some trepidation in coming to the U.S. for an education, with language and safety being key causes for concern. However, both have integrated well into their respective graduate programs here at Johns Hopkins, with Sun preparing a manuscript and Chevee recently passing her qualifier.

Finally, Sun and Chevee note how important it is to take advantage of outside opportunities while here, using time outside of the lab to explore the U.S. and its different cultures — advice that both domestic and international students can benefit from.