How Genetics Can Inform Future Missions to Mars

On May 3, I and four other Johns Hopkins students volunteered with the Personalized Genetics Education Project, or pgEd, at a congressional briefing titled “Enduring the Extremes: Space Travel, Genetics and Astronaut Health.” This briefing, co-hosted by Rep. Louise Slaughter and Sen. Elizabeth Warren, was motivated by NASA’s goal to conduct landing missions to a nearby asteroid and to Mars in the next 10 to 20 years. These missions will require long durations in space, and NASA is interested in how long-term space travel affects humans. 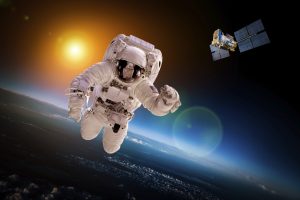 How can genetics inform and mitigate the risks of space exploration?

First, there is a large variation in the severity of the symptoms that astronauts experience. Perhaps there are genetic underpinnings to this variation. Ting Wu, co-founder and director of pgED, said that helping astronauts understand their predisposition to certain diseases or how they may individually respond to cosmic elements may help astronauts decide if they want to pursue space exploration. Furthermore, gene editing and gene therapy may provide protective or therapeutic benefits for astronauts. For example, rare protective genes that dramatically reduce pain perception may be useful for astronauts who need to undergo surgery in space.

We also have to wonder what space does to our chromosomes. As discussed above, cosmic rays can damage DNA and increase cancer risk. Wu has been studying the effect of chromosome folding and positioning on gene expression on Earth in her laboratory at Harvard. She wonders what effects extended stays in microgravity have on chromosomal properties and the consequential effects on physiology.

Finally, Jeffrey Kahn, deputy director for policy and administration and professor of bioethics and public policy at the Berman Institute of Bioethics at The Johns Hopkins University, discussed the ethics of space travel and gene editing. Currently, guidelines for how long astronauts can stay in space are based on age and gender. Women are allowed less time in space than men, and older astronauts are allowed longer space travel time than younger astronauts.

These calculations are based on the amount of time that would increase a person’s chance of dying from cancer by 3 percent. Khan asked whether such restrictions were ethical or if it was even ethical to allow people take on these enormous risks in the first place. According to Khan, if we are going to send people into space, the benefits of such an endeavor should far outweigh the risks to the astronauts. Because of the variation in how astronauts physiologically respond to space, genetics can help evaluate the risk-to-benefit ratio for each individual person.

Additional ethical considerations involve keeping the health and genetic information of astronauts, a relatively small and well-known group of individuals, confidential. Also, there are the yet unresolved ethical issues associated with gene therapy and gene editing if these technologies are to be made available to astronauts.

Our role as volunteers was fairly simple — signing people in, handing out programs and running wireless microphones to audience members with questions — but we had the opportunity to participate in a very thought-provoking conversation. Currently, the ideas seem largely speculative, but time will tell how the seemingly disparate fields of space travel and genetics will work together to extend our reach into the vastness of the universe.