In Search of a Cure for Tissue Injury: The Rise of Mesenchymal Stem Cells in Regenerative Medicine

Regenerative medicine has been dubbed the vanguard of 21st-century health care. This emerging field places an emphasis on curing rather than treating injured or impaired tissues, and seeks to repair damaged tissues in vivo (in the living body) using techniques that trigger cells’ intrinsic healing ability. In the event that the body is unable to heal itself, scientists can grow new tissues and organs in the lab using regenerative methods and subsequently implant them safely in the body.

Although previously considered radical, the basic concept of introducing live cells into tissues or the bloodstream relies on old technology dating back to the 1950s. Now, with advances in research techniques and tissue engineering, the elusive goal of regenerative tissues on demand seems within reach. Enter the mesenchymal stem cell, which has emerged as the sentinel conductor of the regenerative apparatus.

What Are Mesenchymal Stem Cells (MSCs)?

They are specialized cells, originally named for their unique ability to morph into any other type of cell in the body. They can be found in every tissue and particularly reside adjacent to blood vessels. At this stage, they go by a peculiar name: pericytes. When tissue injury occurs, blood vessels break down and release pericytes. The detached pericytes have specialized sensors that allow them to pick up on changes in the microenvironment of the injury site. MSCs then secrete factors, which stimulate injury repair and growth of replacement cells.

The Body’s Own Emergency Response Team

This fascinating modus operandi of MSCs is better encapsulated by a real-world analogy. Imagine the scene of a major fire outbreak. Rescue personnel — the fire service, paramedics and emergency rescue workers — are summoned to the scene. They put out the fire, rescue and stabilize survivors, survey the field, intervene to mitigate any further damage, clean up residual debris and create a safe space for survivors, who may then be sent to the emergency room for further care.

This search-and-rescue system is recapitulated beautifully by MSCs. When an injury occurs, MSCs release a protective film that blocks an overly aggressive immune reaction and make growth factors that promote angiogenesis — formation of new blood supply — block cell death, stimulate the replacement of dead cells and prevent scar formation. If MSCs sense bacteria, they secrete powerful natural antibiotics that kill the bacteria on contact. Some MSCs migrate into the wound itself and morph to replace the old cells. Being quintessential multitaskers, MSCs stabilize the injured tissue, detoxify it and set up the wound for regenerative repair in a complex, multistage process. MSCs also have the unique ability to distinguish foreign material and are able to sequester cell debris from the site of injury.

According to Arnold Caplan, an expert in the field of MSC biology, who originally coined the term MSC, “These cells are so good at what they do. They are like nature’s own repair mechanics or, if you will, natural drugstores.” Caplan has proposed renaming MSCs as medicinal signaling cells. On Feb. 17, 2017, I heard him speak in Broomsfield, Colorado, at the Annual Conference of the Interventional Orthopedics Foundation (IOF), with the theme “Raising the Bar in Interventional Regenerative Medicine.” The IOF provided grants for residents and trainees to participate in the conference, and I was fortunate to be one of the grant recipients. The meeting highlighted major regulatory hurdles in creating and using combination stem cell-based tissue and gene therapies.

In the interest of public safety, the Food and Drug Administration’s Public Health Safety Act controls the licensing of biologic products and imposes strict regulations requiring researchers to submit an investigational new drug application to the FDA before studies in human subjects can be initiated. The FDA raise questions about the purity, potency, safety and use of these cell-based therapies, including MSCs, in humans. Currently, products like platelet-rich plasma, cord blood, allogenic fibroblasts and other regenerative products have gained FDA approval for various clinical indications. 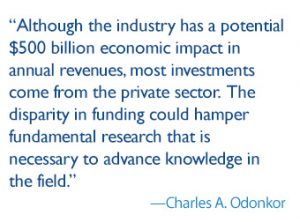 However, according to the Department of Health and Human Services, one of the biggest challenges is the lack of cohesive, government-driven funding for regenerative medicine. Although the industry has a potential $500 billion economic impact in annual revenues, most investments have come from the private sector. The disparity in funding could hamper fundamental research that is necessary to advance knowledge in the field. At present, researchers work in isolation, and there are few cross-disciplinary research collaborations. While large-scale trials are needed, these are expensive for private companies to conduct, and the shifting landscape of regulatory requirements often leads to confusion about expectations and acceptable uses of these products.

From a global perspective, some countries, like Britain, Germany, Sweden, Japan, China and Australia, have started their own national initiatives in anticipation of making regenerative medicine a reality. To achieve the promise of MSCs and other cell- and tissue-based therapies in the United States, a more proactive federal initiative is needed. As research in the field continues to evolve, it remains evident that understanding how MSCs interact with each other and connect with blood vessels will be key to mass-producing, preserving and engineering tissue and organ-based therapies in the future.