Competition in an Age of Collaboration

The competitive drive is a double-edged sword: Fighting for success or superiority sharpens our mental acuity and increases motivation, while concurrently inducing anxiety and decreasing inhibitions. Success in fast-paced. Intensive careers such as business, law, science and medicine require using this competitive spirit to drive higher performance and production. Yet this drive to succeed can prove costly and may also lead to burnout, career changes, and—more worrisome—dishonesty.

As the new generation of trainees, we’re growing in an environment that fosters collaboration, but the post-training hunt for jobs has never been more cutthroat. Therefore, it’s imperative that we understand how to stimulate our competitive drive to excel without crashing down on the other side.

Competition in the workplace and education systems is still a hotly contested issue. On the one hand, many managers and educators argue that competition brings out the best in their employees and students, and the competitive drive can be exploited beyond what’s expected. These leaders often employ tactics that openly compare production, such as workplace contests, class-rankings, and grading, on a curve. Other leaders believe that direct competition adversely affects employee and student performance. So, instead, they might keep bonuses and rankings secret, while rewarding broad collaboration. Unsurprisingly, data supporting one tactic over the other have been mixed. 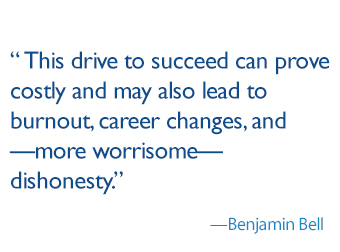 Recently, sociologists have begun to examine how the framing of competition in both the workplace and the classroom impacts success. In one study, employees were given a hypothetical challenge in which they were told their sales numbers would be compared with their colleagues at the end of a trial month. The workers were divided into two groups: Half were told their success during that month would determine how high above average their bonuses would be, while the other half were informed that if they scored lower than average, they would risk performance reviews and termination.

After completing the study, the researchers reported an interesting and relevant phenomenon. The positively motivated first group significantly increased their output during the experiment and engaged in a variety of creative behaviors to achieve their numbers. The other group—those threatened with negative ramifications—reported higher levels of anxiety and stress, and primarily focused on working longer, harder hours, rather than exploring creative solutions. Of course, in our own lives, competition is nearly always framed in both the positive (career success!) and the negative (failing) simultaneously. Therefore, whether we are aided or hindered by competition largely depends on our interpretation of each challenge.

The Dark Side of Academic Competition

In the experiment described above, the researchers reported one additional significant difference between the two groups: Those threatened with failure were more likely to engage in unethical behaviors. This aspect of human nature poses a serious risk in high-level, fast-paced career fields such as science and medicine. Research moves quickly, and the “publish or perish” motto has never been more true. Medical jobs are hard to come by, and without superb grades, it may be hard to access your ideal career. In fact, with the current aggressively competitive funding environment, and the consequences of losing so serious, many journals are reporting significantly increased levels of fraud and paper retractions.

A number of researchers are investigating this dark side of academic competition and have made a number of recommendations. Most involve identifying ways to reduce the cutthroat pressure trainees constantly face, such as getting rid of class rankings and de-emphasizing the number of published papers needed, as well as fostering a stronger spirit of collaboration throughout the scientific and medical communities. Realistically, however, high-stakes competition will likely never vanish from our culture. So it behooves us to learn how to harness this innate drive to improve our chances for success.