Cellulite: Who, Why, and What Can Be Done

It’s funny to note that many medical conditions are described using food analogies. For example, boxers are often diagnosed with “cauliflower ear”, a condition where the swollen ear resembles the folds of cauliflower; and birthmarks with a characteristic red color are referred to as “port wine stain.” Another example, cellulite, is often described as “orange peel skin” or “cottage cheese-like.” Cellulite affects 80 percent to 90 percent of women, most of whom consider it unsightly, inconvenient or unattractive. But why do women get cellulite and not men?

There are several possible reasons, all of which are attributed to unique aspects of female physiology. Subcutaneous tissue is organized differently in males and females. In females, the connective fibers that hold adjacent cells together are organized perpendicularly, which allows fat cells to expand in a rectangular pattern; whereas in males, these fibers are zig-zagged, which constricts the fat cells into a diagonal arrangement. These patterns are not unique to overweight or obese people, but are completely determined by sex.

Gaining weight can exacerbate the appearance of cellulite, however, because it causes fat cells to expand, similar to overfilling a mattress. Differences in sex hormones between males and females have also been suggested as the cause of female cellulite, specifically those related to the feminine hormone cycle. Researchers have pointed to increases in estrogen that occur during the menstrual cycle as a possible cause of chronic inflammation that could lead to the destruction of subcutaneous connective tissue.

Damage to connective tissue could cause or exacerbate the appearance of cellulite by affecting the shape and integrity of the elastic fibers that are responsible for holding tissues in a specific organization, making the skin more prone to the indentations and rippling which are characteristic of cellulite. Despite the high prevalence of cellulite, however, there is currently only a small body of published research regarding the cellular mechanisms leading to cellulite, and the precise cause remains unknown. 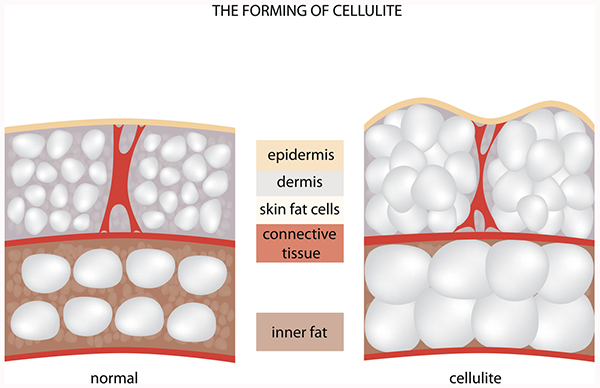 Even though cellulite isn’t a health issue, but rather a female trait, many women may still want to change the appearance of their “orange peel skin.” Currently, the simplest way to reduce cellulite is to lose weight. However, for reasons that aren’t clear, weight loss doesn’t always help for some women. There are many other treatments available, including topical treatments, laser therapy, shockwave therapy, dermabrasion and manual massage. A recent review looked at over 70 clinical studies and concluded that laser therapy seems to be the most effective.  Laser therapy is a relatively expensive but minorly invasive option. The procedure requires that patients visit a physician, who numbs the affected area and makes several small incisions through which a laser is threaded. Once inserted, the laser thread can target and ablate enlarged pockets of fat and stubborn subcutaneous fibers that may be causing the skin’s dimpled appearance. Due to the cost of this treatment, some may opt for other treatments or diet and exercise plans instead. Ultimately, women should consult a physician when considering which option is best for them.

The prevalence of smooth, photoshopped thighs on today’s billboards and magazine covers simply does not represent actual female physiology. It’s important to remember that having cellulite isn’t a symptom of a larger medical problem, and it certainly isn’t something that requires treatment if it isn’t an aesthetic concern. For women who are bothered by the appearance of their cellulite, however, current treatments may help, and more innovative treatment options may be just around the corner.

« Bridging Basic Research and Commercialization: Johns Hopkins Technology Ventures Forges the Path » Predicting the Path of the Next Flu Pandemic