First Approval of Cancer Immunotherapy Based on Genetic Marker 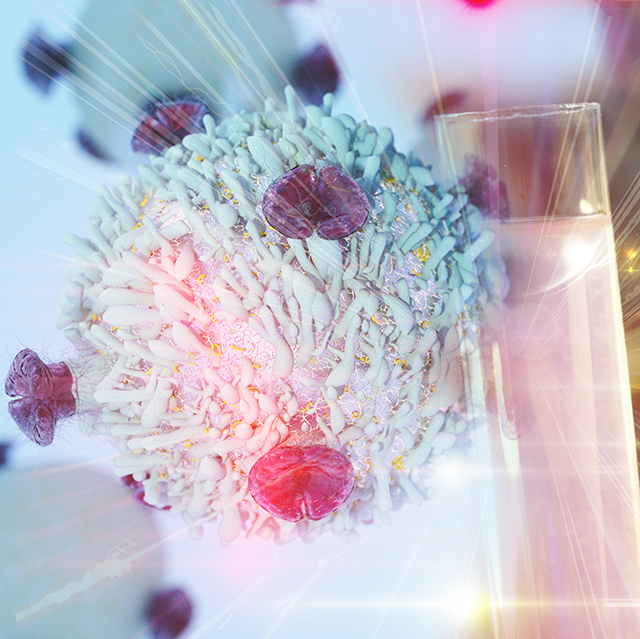 Immunotherapy is rapidly becoming one of the cornerstones of treatment for several types of cancers, and pembrolizumab, a well-known humanized antibody against the checkpoint inhibitor programmed death 1 (PD-1), is again in the spotlight for new expanded use based on patient's genetic differences. In a first of its kind, the U.S. Food and Drug Administration approved use of pembrolizumab based on a common genetic biomarker, rather than the primary cancer location.

Scientists at the Johns Hopkins Bloomberg~Kimmel Institute for Cancer Immunotherapy led a  three-year clinical trial for 86 patients with 12 different types of advanced cancer, including colorectal, pancreatic and prostate cancer. The common denominator was the presence of DNA mismatch-repair mutations in the patients' cancer genomes.

“Mismatch repair” refers to an important group of proteins that recognize, excise and replace incorrect DNA bases. Improper DNA bases can come from errors that occur when the genome is replicated each time a cell divides, or from environmental mutagens, such as cigarette smoke or UV exposure. The mismatch repair system is critical for identifying and repairing these mutations, which can otherwise lead to, or exacerbate, the progression of certain types of cancers. Critically, mutations in these mismatch repair genes that impair the system’s ability to correctly recognize and replace incorrect bases have been tied to certain cancers and advanced disease progression, including Lynch syndrome (which accounts for 1–7 percent of all colorectal cancer cases).

This clinical trial enrolled patients who had mismatch-repair defects and had failed at least one other form of therapy. As part of the treatment course, each patient received intravenous pembrolizumab every two weeks for two years. Positive results showed that tumors regressed in size by at least 30 percent in 53 percent of patients, with 25 percent of patients showing complete disappearance of their tumors. The survival rates for these patients with advanced cancers were remarkable, such that 76 percent of patients were alive after one year, and 64 percent were still alive after two years. So far, 11 patients have completed immunotherapy and have shown no disease progression or recurrence. Without immunotherapeutic intervention, it was estimated that patients with these disease profiles would have prognoses of six months at most. 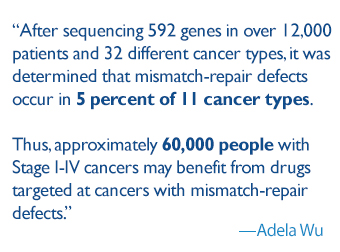 The results of this trial and the subsequent swift approval by the FDA hold widespread promise. After sequencing 592 genes in over 12,000 patients and 32 different cancer types, it was determined that mismatch-repair defects occur in 5 percent of 11 cancer types. Thus, approximately 60,000 people with Stage I-IV cancers may benefit from drugs targeted at cancers with mismatch-repair defects.

Patients with mismatch-repair defects, regardless of cancer type, are more likely to respond to pembrolizumab. This research could pave the way for future cancer drug research to zero in on the underlying genetic makeup of tumors for better treatment.