Stop and Smell the Pages

As a child, my mother would take my siblings and me to the local public library. I would check out so many books that the librarians would often ask if I was sure I could read them all. I met their challenge, however, to the point where I would sometimes get in trouble at school for reading under the desk. In high school, my friends and I would spend hours in the library reviewing calculus problems and laughing at comic books during our study breaks. In college, we had 24/7 access to our school library, and almost half my time as an undergraduate was spent amongst the books.

One of the facilities that I have most missed in medical school is easy access to a library. The Johns Hopkins campus has no shortage of libraries, but all of them have either limited hours or facilities, making them fairly inaccessible to students who wish to spend extended amounts of time studying there. This week was the first time in years that I had set foot in a library. The quiet feel and smell of paper brought back so many memories that I spent almost an hour there perusing the stacks, which led to the discovery of many treasures, such as an encyclopedia from the 1860s and a book donated by a highly controversial former patient. 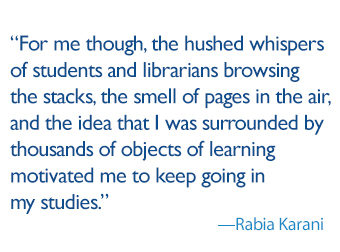 Libraries have always held a special meaning in our society. They are a place where for millennia, the most sacred texts and the most important secrets of societies were stored. They are a place where people can gather with friends to increase knowledge. They are one of the few public places where one can spend hours alone getting lost in thought or in the thoughts of others. Libraries are vital to the development of an interest in school and learning in children, as they allow children space to explore their creativity. Programs in libraries serve as havens of safety and fountains of knowledge for children after school hours. I know that if my mother had not taken us to the library at a young age, then I would not have developed an early interest in school. Finally, libraries are a place for the community, where children, adults, students and the elderly can all gather to empower their own learning.

Since I have started medical school, the usage of libraries had been shrinking, and study spaces now consist mainly of large rooms with desks and a few computers. E-books are the new trend, and almost everything is now in either PDF form or available online. For me though, the hushed whispers of students and librarians browsing the stacks, the smell of pages in the air, and the idea that I was surrounded by thousands of objects of learning motivated me to keep going in my studies. It is just not the same studying in an empty room. Libraries are communal spaces, and it is important to remember that books in libraries are far more than mere objects that can be replaced by virtual copies. They are magnets that draw in a community, that help spawn ideas and invention, and ultimately, are an investment for future generations. The trend of shrinking libraries should be reversed, and these community centers should be brought back to the forefront of scholarly life.

Rabia Karani ⋅ A Day in the Life library, studying ⋅