Does My Sense of Smell Make Me Look Fat?

Long before we see or taste food, what strikes us most is its aroma wafting through the air. While eating, what we perceive as taste is not only due to the sensation on our taste buds, but is also mediated by our sense of smell. Although we can detect only five primary tastes, we are able to detect close to 20,000 different odors at ten different intensities. This means that smell is an integral component of enjoying food. We all become most painfully aware of this while suffering from a stuffed nose, when lack of smell can make food taste unappealing or bland. Without smell, there is almost no taste.

However, loss of sense of smell has interesting metabolic consequences as well. A recent study showed that losing the ability to smell made mice lose weight even though they were eating the same amount of food. This remarkable study was conducted by Dr. Andrew Dillin and his team at the University of California, Berkeley, and was published in a recent issue of the journal Cell Metabolism.

In this study, scientists injected mice with diphtheria toxin, to cause a temporary loss of the pool of neurons responsible for sensing odor, rendering the mice unable to smell. These mice were then fed normal food. After three months, the mice that had lost the sense of smell weighed slightly less than the control group with an intact sense of smell. What was most surprising, though, was that in another experimental group — mice fed a high fat diet instead of the normal chow — the mice lacking the sense of smell weighed significantly less (16 percent less) than the control group. Additional experiments showed that even mice that were already obese lost weight when they lost their ability to smell.

What happens if the mice can smell even better than normal? Dillin and his colleagues studied that as well. Mice were genetically modified to be able to smell better than normal mice. The super smellers ate the same amount and type of food as the normal mice but quickly became obese. This supports the idea that the sense of smell plays an important role in determining how many calories are burned by mice. 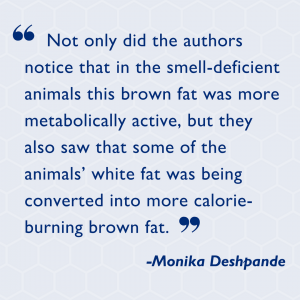 The most obvious explanation would seem to be that the mice that couldn’t smell food were eating less, and therefore losing weight. However, the scientists observed no difference in the amount of food consumed by mice that had lost their sense of smell when compared with the control groups. The explanation turned out to be that the smell-less mice were burning more calories, especially via their brown fat. Unlike white fat, which predominantly stores calories, brown fat has the ability to burn energy and produce heat. Although everyone has a little bit of brown fat, most of which is typically in the neck and shoulder region, the location often varies from person to person, and it can be very difficult to locate brown fat in humans. Mice, on the other hand, have much more significant stores of brown fat. Not only did the authors notice that in the smell-deficient animals this brown fat was more metabolically active, but they also saw that some of the animals’ white fat was being converted into more calorie-burning brown fat. Further studies showed that when mice lacking the sense of smell eat normal amount of food, special nerves in their body called the sympathetic nerves get stimulated. These nerves in turn activate both the brown fat and the white fat to burn more calories.

Although this phenomenon has not yet been studied in humans, the potential implications for weight loss while maintaining a regular diet are intriguing.

« The Mystery Behind the Jargon » McCain and Brain Cancer: What’s in Store for Glioblastoma Treatment?