It’s Hard Work Being a Boy (and, It Turns Out, a Girl)

Basic biology tells us that in humans and other mammals, embryos with two X chromosomes develop as females, whereas embryos with one X and one Y chromosome develop as males. If only it were that simple. As it turns out, genetic makeup doesn’t fully determine which sexual organs will develop in utero.

Every developing embryo, irrespective of its sex, at one point contains both male and female reproductive tracts, referred to as the wolffian duct and the müllerian duct, respectively. If the fetus produces testosterone and the anti-müllerian hormone (AMH) gene products from the Y chromosome — these molecules elicit cellular signaling events that lead to the destruction of the female müllerian ducts. The wolffian ducts subsequently develop into male reproductive organs, such as the seminal vesicles, vas deferens and accessory structures. In the absence of testosterone or AMH, the wolffian ducts degenerate and the müllerian ducts develop into female reproductive organs including the fallopian tubes, uterus, cervix and upper vagina. These pathways were first identified and elucidated in the 1940s by the French endocrinologist Alfred Jost, who conducted intricate experiments using rabbits and showed that female development is a "default" pathway that needs to be actively overridden for the development of male sex organs.

A new study published in Science by Humphrey Yao, Ph.D. challenges this age-old concept of the female pathway as “default” and shows that the development of femaleness is also an active process. The authors implicated a protein called COUP-TFII as a key player that is required to actively eliminate the wolffian duct in a developing female embryo in order to give it female characteristics. 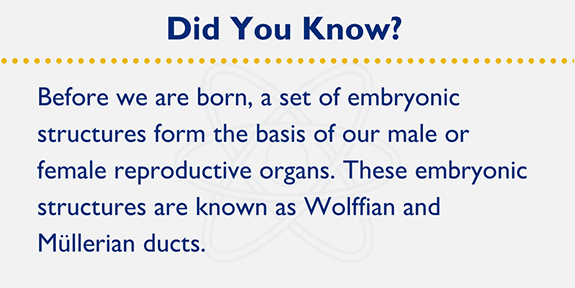 The researchers had originally set out to study how tissues on the outside of the early ducts communicate with the lining of the tubes in the early embryo to direct proper organ development. Since the COUP-TFII protein is produced in that outer layer, Yao suspected it could play an important role in this signaling process. His team mutated the gene for COUP-TFII in mice so that this protein was no longer produced by the developing embryos. They observed that in these mutant mice the communication in the reproductive tissue of early female mouse embryos was disrupted. However, what was surprising was that these female embryos retained not only the female müllerian duct but also the male wolffian duct.

The researchers investigated whether the female embryos made extra testosterone that could explain the retention of the wolffian duct; however, the testosterone levels in the mutant female embryos were unchanged. Instead, the team found that COUP-TFII activated signaling pathways that actively destroy the wolffian duct in females. In the absence of this protein, the male ducts are not destroyed, a process that was previously thought to proceed in XX embryos by default. Another surprising observation was that genetically XY male embryos mutant for the COUP-TFII gene had intact wolffian ducts even though they didn’t produce testosterone. This showed that, unlike what was earlier believed, male embryos are capable of developing male tubes in the absence of signals from testosterone and AMH, and that the development of female sex organs does not proceed by “default” but rather requires the coordinated action of specific signaling proteins.

Although the study was conducted in mice, COUP-TFII is also produced by human embryos, making it highly likely that the pathway identified here may work the same way in humans. This study widens our understanding of the processes that govern the proper development of sex organs and has the potential to help understand disorders of sex development in humans.