Genetic Double-Agents Are Making You Old

We’re getting old. Unprecedented advances in biomedical research and technology over the last century have increased the average human lifespan in the United States by over 50 percent.1 And with more people enrolling in Medicare than prenatal partner yoga, it is vital to understand and improve the health of the aging population. Unfortunately, getting older is often accompanied by any myriad potential health conditions — risk of cancer, neurodegeneration, bacterial infections, and physical injuries are all markedly increased in people over 60.2 We weaken with age; this is the main reason there is a categorical distinction between the elderly and the youth (and potentially why people are put off by being called old). But why? Why does the flow of time usher rapid growth and development for 20 years, then plateau in adulthood for another 20 years, followed by 40 years of deterioration? On September 18, a research group from Germany published in Genes and Development the first evidence complementing a theory of evolutionary oversight called “antagonistic pleiotropy” as an explanation for age-related health decline.

Antagonistic pleiotropy (AP) was first proposed by George C. Williams in 1957 as an evolutionary explanation for senescence (biological aging).3 This hypothesis proposes that natural selection only positively selects for genes that enable and optimize reproductive fitness in an organism. In theory then, evolution could care less what those genes do once the window of sexual maturity is closed. AP proposes that genes can have multiple effects on an organism — pleiotropy, meaning “many” — and some of these can be antagonistic. In other words, the potential negative effects of a gene can be considered as fitness trade-offs, where the same gene that is necessary to achieve functional reproduction during development, promotes degeneration later in life. 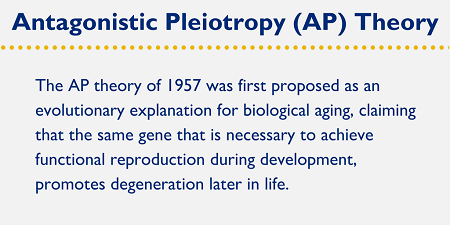 The authors reported the identification of 30 previously unknown longevity genes that increase life span exclusively in postreproductive-aged worms, using the common model organism, C. elegans. Consistent with AP, 19 of these are essential to development, reproduction, growth and health, whereas their silencing in late life extended life span by almost 60 percent. Interestingly, the genes that most significantly impacted longevity had roles in autophagy. Autophagy is a quality-control system that is responsible for disposing of toxic, misfolded proteins in cells. Patients with neurodegenerative diseases such as Alzheimer’s, Parkinson’s and Huntington’s exhibit autophagic dysfunction.4 Unsurprisingly, autophagy inhibition in young organisms leads to increased toxic aggregates, which led to reduced life span in the study. This suggests that autophagy functions for organismal benefit during development, but its dysfunction contributes to organismal detriment in old age — as AP would predict.

The authors provided further evidence for AP’s role in aging by showing that the worms not only lived longer, but were also healthier when genes involved in autophagy were inhibited in the post-reproductive phase. Additionally, exclusive inhibition of autophagy in neurons was enough to recapitulate health and lifespan extension. Elaborating on the molecular mechanisms driving life-extension, the authors reported that inhibition of autophagy vesicle nucleation ameliorates neuronal and organismal health decline during aging. This suggests that autophagy nucleation malfunction in neurons may be driving degeneration in other tissues or organ systems as these animals age.

So, will I live forever?

Taylor Swift and Zayn Malik will be happy to hear that the answer is no. Even though this research presents evidence that autophagic inhibition leads to increased longevity, it’s a far cry from immortality, especially given the differences between human and C. elegans reproductive life cycles. More importantly, the authors managed to, for the first time, validate antagonistic pleiotropy as a contributor to decaying health in old age. This greatly enhances our understanding of age-related health decline by adding AP as another dimension to the equation describing the human lifespan.

Eduardo Martínez-Montes ⋅ A Day in the Life aging, Human Genetics ⋅