Fighting malaria is getting harder, with rising rates of drug resistance and drug tolerance making it more difficult for doctors to effectively cure patients. Drug resistance is distinct from drug tolerance, in that a resistant microbe can survive even high doses of a particular drug, while tolerant microbes are able to replicate in the drug’s presence for a certain period, but are eventually killed if the drug is administered for a long enough period. Antimalarial regimens are designed to efficiently kill the malaria parasite, while trying to minimize unpleasant side effects, and taking into account the feasibility of different drug-dosing schedules.

Malaria, a parasitic disease transmitted by mosquitoes, affects over 200 million people worldwide. Doctors have fought malaria with various remedies for hundreds of years, with some of the earliest antimalarial efforts relying on the use of natural remedies, including cinchona bark — the natural source of quinine, one of the first major antimalarials — and “sweet Annie,” or ginhao — the source of another potent antimalarial, artemisinin. 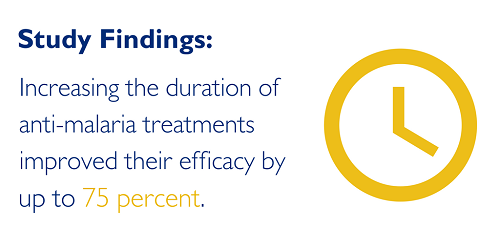 Artemisinin-based drugs make up one of the most promising classes of antimalarials in use today, and have shown a remarkable ability to rapidly and dramatically reduce parasite burdens, especially when administered in combination with other classes of antimalarials. Dubbed artemisinin combination therapies, or ACTs, these regimens refer to any drug regimen that uses an artemisinin-based drug with a long-acting partner drug.  Artemisinin is fast acting but short lived, so it’s often paired with a drug that lasts longer to kill any leftover parasites. ACTs have been the primary option for treatment of malaria for several years; however, they have very recently become less effective at curing patients, indicating a rise of artemisinin tolerance.

Artemisinin-tolerant strains of malaria emerged in the early 2010s, spreading from Thailand and Cambodia throughout Southeast Asia. Thankfully, artemisinin tolerance has not yet spread to Africa, but researchers want to stop the spread quickly. Although patients infected with artemisinin-tolerant parasites eventually clear the infection, this is primarily because of the second drug in ACT regimens(1). The main concern is that drug resistance will arise to the second, partner, drug over time and render that particular ACT combination ineffective. Efficient, thorough treatment is essential to cure patients, save lives, and prevent drug resistance from emerging.

The recent emergence of parasite tolerance to commonly prescribed antimalarial drugs has prompted researchers to more precisely determine the optimal regimens — in terms of the specific drug and its dosing — even for patients living in areas where drug resistance has not been reported. A recent study, published by Leah Walker and David Sullivan, M.D., of the Johns Hopkins Bloomberg School of Public Health, showed that simply altering the duration of artemisinin-based therapies results in more effective parasite-killing in infected mice, and has renewed interest in improving antimalarial regimens as a means to strengthen the fight against malaria.

In their study, authors Leah Walker and Dr. David Sullivan used a novel quantitative assay to determine numbers of malaria parasites in mice, treated with different dosing regimens. The assay relies on the use of parasites which have been genetically engineered to express luciferase — an enzyme that gives fireflies that special glow — giving the researchers a visual read-out of infection, such that higher luciferase expression indicates higher parasite numbers. The authors treated mice with different combinations of antimalarials for varying durations, extending from the traditional dose of one parasite life cycle, up to three parasite life cycles. When using the artemisinin-based drug, artesunate alone, they found that a human equivalent dose killed more parasites, but was not fully curative. However, in combination with antimalarials, such as piperaquine, that are often used as the partner drug in ACTs, increasing duration of treatment did lead to effective cure, increasing the cure rate by 66-75%(2).

This exciting new data shifts the perspective on antimalarial research, showing that extending the duration of treatment is an effective way to increase its success. This could be further studied in a clinical trial setting to improve current antimalarial drug regimens, and may give researchers new hope in the fight against malaria and the emergence of drug resistance and tolerance.

« Genetic Double-Agents Are Making You Old » A Revelation About DREADDs: A New Neuroscience Technique with Promise for Clinical Psychiatric Treatment