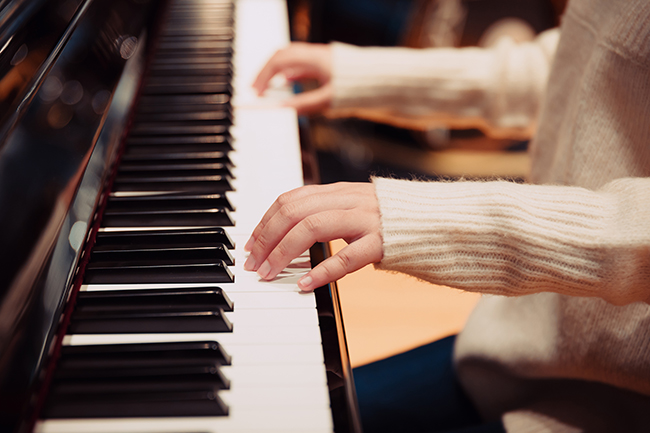 When I was 4 years old, my first piano teacher came to my house. Our piano was small and wooden and stood flush against the wall. I started with scales and finger drills, and eventually, as the years passed, found my way to Billy Joel, the Beatles and Elton John sheet music. I was hardly a student of Mozart, but I wasn’t a novice either. I played for my parents and friends, and practicing and learning sheet music became a routine part of my day. During my freshman year of college, I would trek across campus to the performing arts center and play in the student practice rooms between classes. I loved playing the piano, but the busier I became, the less time I made for it. On holiday breaks I occasionally played while home, but piano eventually became something I used to do, instead of a current hobby.

This past holiday, I went home to my piano and played for hours. I played songs I learned in middle and high school. Even with the sheet music in front of me, I wasn’t so much reading the music as my hands were guiding the melodies. My fingers remembered where to rest and where to jump, and my foot knew when to push down and release the pedal. It felt like I had never stopped. It was natural and smooth, even though I hadn’t played in years. It was like riding a bike or driving a car. This made me wonder about musical memory and how my fingers could remember what I was sure my brain had forgotten.

Oliver Sacks, M.D., was a renowned neurologist at Columbia University. He pondered these questions in his book, Musicophilia, in which he discusses his patients’ experiences with music and the brain. In one encounter, a patient suffered from herpes encephalitis, which damaged regions of his brain and prevented him from encoding and understanding new experiences and memories. Additionally, this patient suffered from retrograde amnesia, causing him to forget his entire past. Each moment felt like coming to life, but in a blink of the eye, he forgot.

When Sacks visited this patient, he noticed stacks of sheet music and books of cathedrals, and soon learned that he was once a musician. Interestingly, this patient wasn’t aware he knew how to play a certain song until he was actually playing it. While he had no memory of his wife’s name or of her published novel, he was able to play one of Bach’s Forty-eight Preludes and Fugues beautifully. While he could not remember his children or grandchildren, when his wife would start to sing, he would join in as if nothing was wrong. As Sacks wrote, “all of his musical powers were totally intact.”

Sacks attributes this patient’s intact musical memory to intact procedural memory versus episodic memory. Episodic or explicit memories involve a complex network of brain regions, including the temporal lobe and hippocampus, whereas procedural or implicit memories likely involve more primitive structures of the brain, including the cerebellum and basal ganglia that ultimately make connections with the cerebral cortex. Procedural memories are obtained through repetition and play, long before children develop explicit, episodic memories. In essence, procedural memories can be obtained in an unconscious state. In contrast to remembering an event or a scene, remembering a melody subconsciously relates each individual note to a “whole” piece. Therefore, Sacks claims that, “Remembering music is not, in the usual sense, remembering at all. Remembering music, listening to it, or playing it, is entirely in the present.”

As I sit down at my parents’ piano, I remember each teacher, each song, each time I played with my sister or friends. However, as I play with no sheet music in front of me, I realize I am, like Sacks’ patient, not remembering at all. The melodies and rhythms are stored deep within the primitive structures of my brain and I am playing music I once heard, once played, as if I never stopped playing at all.