What Does Dopamine Really Do? 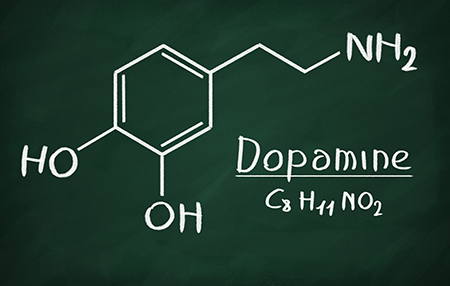 You’ve probably heard of dopamine before. Dopamine is a neurotransmitter—a chemical in the brain responsible for conveying information from one cell to another. It has made quite a name for itself because all of our favorite things—eating delicious food, seeing the person you love, hearing a good song come on, getting a gift, winning a prize—are associated with the release of dopamine by our brain cells. But what does dopamine actually do?

A quick search for dopamine in the news yields all kinds of results. One article claims that dopamine release in the brain causes excitement, infatuation and continual pleasure when we see someone we’re attracted to. Another article quotes a former Facebook executive saying, “The short-term, dopamine-driven feedback loops we’ve created are destroying how society works.” And yet another article blames dopamine for making you indulge your doughnut craving.

These articles neatly lay out the three principal aspects of reward: the pleasure you experience when you enjoy a reward (such as seeing the person you’re attracted to), learning about the value of an action or stimulus in the environment via feedback (such as a Facebook “like”), and the motivation to reach for that doughnut. So how does dopamine factor into each of these properties? 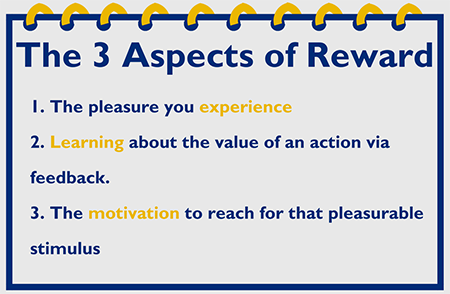 The first clues to dopamine’s function came from looking at dopamine-related activity in the brain. One approach is to monitor the concentration of dopamine in regions that receive the dopaminergic signal. This can be accomplished in humans with PET imaging of molecules that bind to dopamine’s target receptors or in rodents with an electrochemical technique called voltammetry, which detects electrical changes related to the concentration of dopamine. Another approach is to record the activity of the cells that produce dopamine. This can be done in humans with functional magnetic resonance imaging (fMRI) or in monkeys and rodents by inserting wires into the regions of interest to record the electrical activity of individual cells.

Studies using these techniques revealed that both the concentration of dopamine and the activity of cells that produce dopamine correlate with obtaining rewards. Such results have contributed to the general idea that dopamine is involved with reward. But in order to determine which of the three aspects of reward involve dopamine, scientists needed to go beyond correlative measures and actually manipulate dopamine to see the effect on reward processing. What did they find?

Surprisingly, even though dopamine is most often talked about as the pleasure molecule, it is actually least involved in the sensation of pleasure. One piece of evidence comes from monitoring rats’ expression of pleasure in a taste reactivity test. Just like humans (and particularly babies), rats make “yummy” licking movements when they consume something they enjoy. Scientists can estimate how pleasurable a reward is for rats by measuring these mouth movements. Both reducing dopamine signaling (by giving rats drugs that block dopamine receptors) and increasing dopamine signaling (by giving rats amphetamine) have no effect on rats’ expression of pleasure when they consume sugar water, so dopamine must not be involved with experiencing pleasure.

The Role of Dopamine in Learning

Many experiments over the years have established a role for dopamine in learning. One exciting finding came out of my lab a few years before I joined. A theory based on recordings of individual dopamine-producing neurons is that quick bursts of activity in these neurons drive learning about the cues (such as a tone) that predict a reward (such as juice). My lab was able to test this hypothesis by using optogenetics to manipulate dopamine-producing neurons in rats and then looking for evidence of the rats’ learning. First, rats learned that a cue predicted a sugar water reward. When an additional cue was added to the first, the rats did not learn that it also predicted the sugar water reward (a phenomenon known as blocking). But by activating dopamine-producing neurons during reward consumption, rats did learn that the additional cue predicted the reward. This experiment demonstrated that the activity of dopamine-producing cells is sufficient to cause new learning.

Dopamine has also been shown to be involved in motivation. One way to measure motivation is to test how much individuals are willing to work for a reward. In rats, this is often the number of lever presses they will make to get a reward, such as a food pellet. One study found that decreasing dopamine signaling by either blocking dopamine receptors or selectively killing the cells that produce dopamine reduced how much rats would press a lever to get a preferred food pellet when a less preferred pellet was also available for free. Recently, my lab performed a similar experiment with optogenetics in mice that showed that inhibiting dopamine-producing cells reduced the likelihood that mice would work to earn reward and also reduced the number of responses they made once they had already started poking. These studies show that changing the amount of dopamine in the brain can change how motivated you are to work for reward.

So the next time you hear about dopamine doing something, ask yourself, “Is this really a function of dopamine?” If it’s related to feeling pleasure, the answer is probably no. But if it’s that positive feedback you were hoping for on your Facebook post, or if it’s the motivation to reach across the table for a doughnut (or, more positively, to ride your bike to a frozen yogurt shop), the answer could be yes.