Choosing to Be Irrational: How Neuroscience Incorporated Economics, and Vice Versa

The Department of Neuroeconomics and Neuromarketing sounds like a title chiseled on the wall of a corporate division in a dystopian future; the highlight of a consumerism episode of Black Mirror. But Dino Levy, a researcher in this seemingly dystopian department at Tel Aviv University, was quick to readjust our preconceived notions of what his lab studies when he spoke at Johns Hopkins several weeks ago. Neuroeconomics and neuromarketing are terms that refer to the science of choice: How do humans establish value and compare desirability between dissimilar objects or rewards?

The fields of economics and neuroscience are remarkably complementary. For decades, economists have gnashed their teeth over the “rational agent paradox,” in which people en masse often fail to adhere to strict logic in financial markets. If mathematical models always value $5 equally, humans can become emotionally invested in their $5, and are loath to lose it even for something of theoretically equivalent worth. In breaking down the neuronal basis of individual decision processes, neuroscientists have puzzled over a cacophony of motivated behaviors. Additionally, most of our daily decisions compare options that are entirely dissimilar: Is this slice of cheesecake worth $5? Is our pleasure worth the financial and health costs? How can anyone make any choices when there are so many components to consider?

Nonetheless, animals and humans make hundreds of similar decisions every day, and Levy attributes this ability to our internal subjective value scale. The sum total of our experiences and our genetics enables us to rank choices on an internally consistent basis. This is the mental framework that underlies familiar thoughts, such as, “I went to the gym yesterday and I do have a sweet tooth; so this cheesecake is worth $5 right now.” Understanding how subjective values are assigned by individuals and people as a whole is vitally important for economics as much as obesity management.

It is impossible to discuss the science of decision making and valuation without paying homage to Daniel Kahneman and Amos Twersky, the Nobel Prize winning fathers of behavioral economics. They were the first to carefully examine nonrationality in human decision making, to understand that the way our mind works — primarily through heuristics and experiential framing — can result in biases and emotional components that don’t necessarily align with the objective “best” choice. Despite many economists’ and even our personal insistence on rationality, likely all of us can identify with two of the field’s best-described biases: The “endowment effect,” which describes how we overvalue things we already own, and “delay discounting,” in which the present value of a reward is reduced as time to receiving it increases — e.g., would you choose $20 today or $100 in a year? 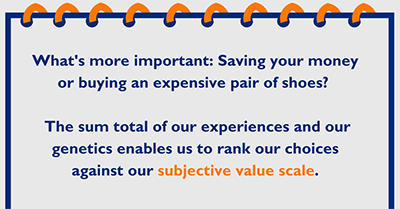 Cognitive and behavioral psychologists have identified many of the tools that humans use in making daily choices. But neuroeconomists seek to understand the underlying neurological processes of these valuations that drive so much of our behavior. Levy and his lab posit that a subregion of the prefrontal cortex, the main area of executive function, is responsible for encoding our subjective value scale. This common scale is absolutely vital for evaluating the salience, or desirability, of the outcomes of complex decisions we must make regularly.  For example, if I were to offer you $100 to help me move on Saturday, you would weigh many unrelated factors: the value of money offered against your time, and the cost of expending effort on your day off from work. But this common scale is flexible and shifts based on your changing day to day, and minute to minute, needs. In this example of the move, $100 holds much more value if your bank account is dangerously low, but a Saturday full of rest can be more appealing if you are sleep deprived. The prefrontal cortex acts to synthesize all of this complex information and establish a common, but subjective and fluid, valuation of each choice outcome.

In theory, the mechanism that acts in humans acts in mammalian animal models as well. And to date, many labs working with animals from mice to monkeys have also identified the prefrontal cortex as the arbiter of choice. But one major difference between humans and animals is the ability to use secondary, rather than primary, rewards — e.g., money instead of water or sweets. On an evolutionary scale, only recently has money developed any reward salience in humans, and many of the common behavioral measures of choice and decisions (delay discounting, loss/risk aversion) are therefore out of reach for even the most advanced nonhuman primate. Instead of getting stuck on the inability of mice to balance a monthly checkbook, Levy and his colleagues use animal models to ask more basic neuroscience questions, such as how internal states such as hunger, thirst or tiredness affect the specific neural representation of value.

Ultimately, Levy’s research seeks to define the unified theory of choice and value that drives the decision-making processes of animals and humans alike. Understanding why we choose the way we do is important for both global marketplaces, where trillions of dollars, lives and careers hang in the balance of human foibles, as well as for individuals struggling with pathological decision processes such as in addiction, gambling and obesity.