In the past 400 years, science has revolutionized the planet several times over. Modern medicine has eradicated diseases that once decimated populations, while physicists manipulate the very building blocks of the universe. Travel and communication are instantaneous worldwide. Should we one day unravel the secret of time travel, we might bring Sir Isaac Newton (b. 1642) to the present day to marvel at our progress. Lost in this world, made unrecognizable to even the most prescient of scientists from the 1600s by technology his own discoveries enabled, Newton might reach out for the familiar and find the unchanged scientific paper. 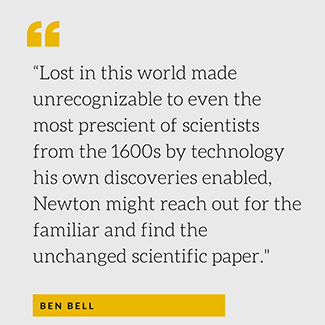 It is actually quite remarkable how consistent scientific communication has remained against the backdrop of technological upheavals manifested by the findings within those same pages. In the era of big data, whole genome analyses and powerful computers in everyone’s pockets, articles in Science and Nature are accessed as PDF files — that most static of file formats — likely familiar even to our time-traveling Newton. Unfortunately, being anachronistic in the world’s most advanced laboratories is not the only issue with the system of science publication.

In conversations with faculty and trainees in science and medicine across Johns Hopkins, several important issues consistently rear their heads. “‘Publish or perish’ is very much alive,” according to two associate professors, as well as numerous postdocs and grad students, but the “publish” side of that bargain no longer exclusively encompasses “doing good science.” As the alpha and omega of career yardsticks, where you publish is as important as what you publish, and this cart-before-the-horse attitude changes the way science is approached. “Every PI (principal investigator) wants a home-run paper,” says one grad student, referring to publication in one of the “big three” journals, Cell, Science, or Nature.  But science is in the midst of a replication crisis, and these top-tier journals lead the pack in retraction rates and indications of p-hacking (statistical manipulation). These journals, like the yellow press of old, are loathe to publish the less splashy results that more often serve as the foundation for incremental advances in science. Furthermore, research, especially at Johns Hopkins, remains a profoundly collaborative effort, yet many students and postdocs feel the classic byline (first author, middle authors, PI/last author) does not fairly represent their involvement in a project.

Responsively, a variety of clever proposals seek to rectify raised issues and realign publishing with its intended purpose. For example, more journals now require use of the CRediT (Contributor Roles Taxonomy) system, which establishes a consistent language for acknowledging each author’s specific contributions, regardless of the order in which they are listed. New biorepositories are opening their electronic doors to accept and make accessible the raw data that underlies each publication, and a dedicated preprinting archive enables more timely scientific communication, not to mention alleviating some of the constant threat of being “scooped” on a story. Until they recently closed, the Journal of Negative Results in BioMedicine provided a platform for scientists to report what they found to not be true, thereby saving other labs from committing resources to those same paths. 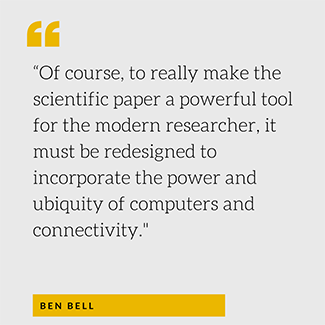 Of course, to really make the scientific paper a powerful tool for the modern researcher, it must be redesigned to incorporate the power and ubiquity of computers and connectivity. Data need no longer be constrained to static reporting of results, instead we can offer dynamic frameworks through which other scientists learn our theories and manipulate our data, and this concept has already been demonstrated in computational notebooks such as Wolfram Mathematica and Jupyter for Python. By breaking our communication and reporting away from the printed page, we can solve many of the current problems plaguing academic science, since p-hacking is not necessary when all the numbers are available to all, and scooping ceases to be a threat when data is generated and shared in real time.

All of us in science and medicine recognize the strength of additional brainpower and collective data to accelerate the overall pace of research, and it was with this intent the first journal, Philosophical Transactions, began disseminating scientific findings in 1665. However, in the intervening centuries, the journal article transitioned from a means to an end in academic science, without even changing its basic format. Today, the incentive structure in scientific careers rewards those high-impact publications at the cost of accuracy, reproducibility and mental health. Ultimately, we are all on the same team in seeking the same knowledge, it’s time we reevaluate the efficiency and alignment of our tools of the trade.