Grad Grooves: The Soundtrack of Our Science

Background music is everywhere. It plays quietly in malls and grocery stores, and loudly at sports events. It is almost ever-present in the TV shows we watch. In addition to all of this, many graduate students listen to music all day in lab. Because we work so much, this means we could have music streaming into our ears (and brains) uninterrupted for over eight hours. How our scientific mentors respond to this is highly variable. Some lab heads think music boosts productivity and morale, while others consider it an annoying distraction. Indeed, several studies have shown that background noise is disruptive to concentration. However, many studies show a benefit from listening to music while working. So which is it? Is music in lab a destructive addiction or a productivity aid? As often is the answer in science, it depends. In this article, I examine the possible benefits and drawbacks.

Music and the brain studied

Music has been around for almost as long as humans have existed. This makes sense, considering that it gives us the same dopaminergic surge of pleasure as chocolate, sex and cocaine1. Although we hear music via our ears, we don’t process it until it reaches the brain. We actually listen to music with our brain. Perception of music relies on grasping not just the presence of a tone, but the frequency and loudness of that tone as well as its relation to other tones in rhythm, harmony, and contour.

In their study of music and the brain, scientists and scholars have tried to separate how the brain processes music compared to other types of sound. Some of the first evidence that music and plain speech are processed independently comes from Russian composer Vissarion Shebalin. After suffering from a stroke, Shebalin could not talk or understand speech but was still able to compose music until his death1. Science also supports the idea that there is some overlap between brain processing of speech and music. A region in the frontal lobe of the brain enables proper construction of syntax in both speech and music1. So music is processed partially along with other types of sound, such as speech, and partially independently. 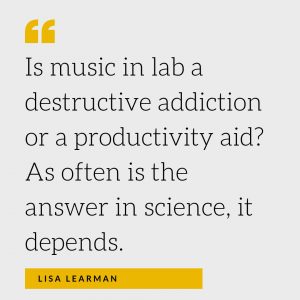 Early studies suggested that background noise in the home, work or school environment disrupts concentration2. The thought was that low levels of noise increased stress and, correspondingly, cortisol — a hormone that interacts with the prefrontal cortex to modulate learning and memory. This led to the belief that background sound is detrimental to productivity. Studies performed more recently suggest, however, that for creative work, low noise levels can actually boost productivity. The theory here is that low levels of noise increase processing fluency by jump-starting abstract cognition and creativity. When the noise levels get too high, however, they decrease information processing and creativity3. This is described as an upside-down U relationship, in which increases in noise levels increase creativity to a certain point, at which greater noise level starts to decrease creativity.

Although the data on background noise is interesting, we know that music, to some degree, is processed differently in our brains than other sounds. When examining music specifically, the data suggest that music improves mood and productivity.

An early study, done in 1972, showed that factory workers were better able to find defects in metal cylinders or rubber seals on a conveyor belt when listening to music. The authors of the study concluded that music increases physiological arousal, and that this enables our brains to maintain attention to repetitive work4.

In 2005, a Canadian study showed that music improved work performance in a group of computer software developers5.  The job of the computer software developer is competitive and often stressful, but it is also creative. Importantly, this type of work is particularly vulnerable to stress-caused errors. Carried out over the course of five weeks and in their actual work environments, the study required the software designers to perform a task that involved locating syntax and logic errors in code. Some of the study participants performed the task with music and some without. The developers in the no-music condition showed decreased quality of work and worse mood compared to those who listened to music. Based on these results, the authors of this study constructed a model in which the direct effect of music is to improve mood, which results in increased productivity and creativity.

Another recent study showed that music decreases stress and increases performance in a specific population: surgeons6. Doctors were given a standard psychophysiological stressor (they were asked to perform serial subtraction), which typically increases autonomic stress responses (measured via skin conductance, blood pressure and pulse). There were three conditions: no music, self-selected music and the investigator selection: Pachelbel’s Canon in D. The researchers’ hypothesis was that music would decrease the stress triggered by a task, as measured by decreases in skin conductance, blood pressure and pulse, and this would improve performance of the task. The data showed that this was the case, and more specifically, that the self-selected music had better results than the investigator selection.

All in all, it seems like listening to music in lab has no drawbacks. That being said, there are a few things to consider:

Work Type — The studies showed that music fosters creative work and repetitive work by improving creative thinking and maintaining physiological arousal, respectively. Is there any type of work in which music does not increase productivity? Yes: convergent thinking. A study from 2017 shows that music elicits a positive mood and increased arousal for creative tasks but not for convergent thinking7. This type of thinking refers to the simple intake of information, such as learning flash cards or selecting the single best answer to a question. So maybe stay away from the tunes when reading research articles or studying for an exam.

Music Choice — Many consider music choice to be an extremely important parameter when examining the effects of music on productivity. For example, music that elicits a sedative effect is thought to prevent or reduce anxiety. But it turns out that familiarity with the music is more important in dictating the listener’s behavioral response than the type of music. That is to say, “mood states following music listening are the result of an individual’s unique past experiences”5. People value preferred music when considering music that best relaxes them. Instead of using the ready-made relaxation mix on Pandora, try crafting a playlist of familiar songs that elicit a relaxed and positive mood for you.

Volume — As stated previously, noise and music can aid in productivity and creative thinking, but this is only true to a certain point of volume8. With anything louder than that point, the background stimulus actually starts to distract from the task at hand and hinders performance. Keep your volume at a moderate level while listening in lab.

Lisa Learman ⋅ A Day in the Life, Perspectives in Research in the lab, Music ⋅

« Re-thinking Language as a Scientific Tool » Why Do Students Pursue a Ph.D. in Neuroscience?