Left- vs. Right-Brained: Why the Brain Laterality Myth Persists


You might have heard artists say they’re right-brained or mathematicians say they’re left-brained. Maybe when you were a kid someone noticed you were left-handed and told you that meant you were creative. The idea that some of us are “left-brained” and others are “right-brained” is extremely popular. But, like so many other appealing ideas, the science doesn’t support it. People use both halves of their brain equally, and even within an individual person, creative and analytical thinking require both the left and right brain. I only learned this about a month ago, and as a 25-year-old graduate student working in neuroscience, I was shocked and embarrassed by my naiveté. I had heard so many professors, physicians and even scientists use the terms “right-brained” and “left-brained.” How could an idea with such little basis in reality have taken such a strong root? In this article, I discuss left brain right brain research, discoveries leading to the development of the brain laterality myth, studies disproving it and theories as to what makes this particular myth so hard to shake.

The idea that the right and left halves of our bodies might be different arose very early in human history. Early humans discovered that there was a near universal preference for the right hand. Not only did this suggest some asymmetry in our anatomy, but it also quickly led to the association of right with positive values and left with sinister, negative values. It’s why we use the phrase “right-hand man” to mean someone we trust and, conversely, why the word “sinister” comes from the Latin root for “left.” This went as far as the severe stigmatization of left-handed individuals. Left-handed people were associated with everything society hated, including black magic and sexual deviance, and many were forced to use their right hand as dominant.1 Later, when we figured out that the right half of the body is controlled by the left half of the brain, the left hemisphere was naturally seen as more important and dominant.

It wasn’t until the 1800s that humans discovered certain brain regions were responsible for certain functions. When a 19th century railroad worker named Phineas Gage shattered his frontal lobe, the once amiable, calm man became angry and irritable. Based on this, scientists who studied Phineas came to believe that the frontal lobe was specialized for emotion and impulse control.2 Determining function based on the behavioral deficits that result from a lesion in a particular area is known as “lesion deficit analysis” and is still practiced today. This technique eventually led to the discovery that speech is based mostly in the left brain.

After enough of these discoveries were made, the theory “functional specialization” arose, which suggests that certain functions rely on specific brain regions.2 Although this theory is well-supported, it was particularly vulnerable to hyperbole and metaphoric interpretation by nonscientists. In fact, the theory of functional specialization set the perfect stage for the experiments that jump-started the brain laterality myth, known as the split-brain experiments. 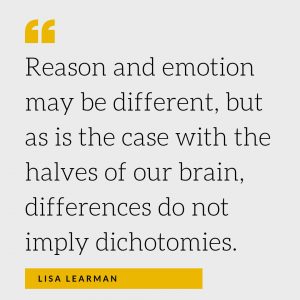 During a split-brain surgery, the connective tract joining the two hemispheres of the brain is cut, resulting in two completely separated halves or “hemispheres.” In the 1960s, some of the first split-brain surgeries were performed on people with epilepsy, as separating the two halves of the brain was an effective treatment in reducing seizure frequency in these patients.1 This presented scientists with an unprecedented opportunity to investigate the unique functions of each half of the brain in a controlled system. From these experiments, the investigators discerned that, for the most part, the left half of the brain outperformed the right in language and rhythm, while the right half was superior in discerning spatial orientation, emotion and melodies.3 This work won Roger W. Sperry the Nobel Prize in Physiology and Medicine in 1981.1

Since the 1960s, new technologies have allowed scientists to look at the brain with higher resolution. These new techniques demonstrate that, although there appears to be some specialization between the hemispheres of the brain, it is a lot more complex than previously thought, certainly more complex than is painted by the left-brain/right-brain ideology.2 Both creative and analytical thought activate both hemispheres equally. Some specific discrete tasks are lateralized, but during complex cognitive processes both hemispheres are involved and communicate. Lefties and righties alike use both hemispheres of their brains equally.1 So why do so many people believe that the two halves of our brain embody opposite ways of thinking, and that individual people have a dominant side? Although nuanced, the answer has to do with marketing and an inherently human drive to categorize.

The Rebirth of a Familiar False Dichotomy

By the 1970s, educational circles believed that traditional teaching practices reflected a tragic lack of effort to develop the right brain in children. The literary field advocated for “writing with right brain to release expressive powers.”3 Many artists and musicians turned to brain laterality for curricular and theoretical guidance. For many, the idea that there was an untapped well of creativity in the right, submissive halves of our brains was appealing.4 In 1979, American artist, teacher and author Betty Edwards published her book Drawing on the Right Side of the Brain, in which she asserted that her success in drawing was due to an ability to switch into the “right mode” of her brain and tap into her creativity and emotional intelligence. Indeed, even today polarities of the brain are broadly invoked in art, business, education, literary theory and other facets of culture.1,2

Is there something particularly alluring about the idea of brain laterality? There is no doubt that these ideas are good for business.3 “Whole-brain learning” products appeal to anyone looking to improve in their chosen field. Additionally, categorizing oneself as right- or left-brained may satisfy a human craving for order. Similar to astrological signs, labeling ourselves by dominant brain hemisphere gives us the security of a defined personality type, capable of explaining actions in the past and predicting the future.

Another factor could be our tendency to define creativity and analytical thinking as opposites. This is known as the “cognitive-affective” dichotomy, which is rooted in early religious teachings.4 Within this ideology there are two mutually exclusive and antagonistic forms of human thought and behavior — reason and emotion. We see variations on this theme throughout time and space again and again. Platonic idealism versus sensualism. The Freudian id versus superego. Science versus art. We repeatedly take two facets of the human experience and pit them against one another. Reason and emotion may be different, but as is the case with the halves of our brain, differences do not imply dichotomies. So resist the urge to define yourself and others as right- or left-brained, analytical or creative, emotional or reasonable. These characteristics co-exist in all of us, allowing us to exhibit a broad range of human behavior. Cry at sappy movies, paint masterpieces, do multivariable calculus and read business reports knowing that your whole brain is supporting you.