Science Says Self-Criticism May Be Hurting Your Work 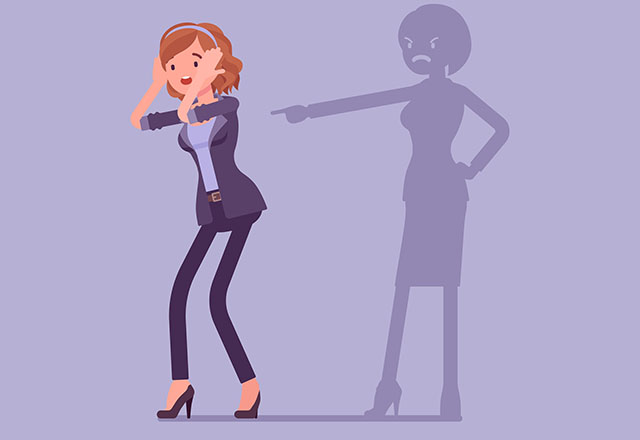 I hear all the time that “failure is the best teacher.” We all know this in some way to be true, but if you’re anything like me, failure is still scary. As a scientist in training, I’ve had more failures than I can count. And, more likely than not, those failures have led to me tearing myself down. I tell myself I should have prepared more, started earlier. I tell myself that I committed gross oversight to not foresee my mistakes. These unhelpful self-criticisms have intensified my feelings of imposter syndrome and, with compounding anxieties, made it more difficult to move forward.

I’ve struggled for years with self-deprecation, unable to shake it. However, Kristin Neff’s comments about her research on self-compassion during a recent episode of on Laurie Santo’s The Happiness Lab podcast really resonated with me.

When we’ve made a mistake, we often feel shame and guilt. Neff explains that shame is flight “safety behavior. When we hang our heads in shame, we’re actually feeling safe because we’re protecting ourselves from the perceived judgments of the group.”

And obsessing over our mistake and our guilt is just another form of the freeze response. If we get ourselves stuck in one place, maybe the danger will pass or we will no longer be able to be a danger to ourselves.

So, intense self-criticism is a natural threat response. However, that doesn’t mean it’s a helpful one. In Neff’s perspective, “it’s actually totally counterproductive. It doesn’t make you safe at all, and it actually makes you less safe because it inhibits your ability to make productive change.”

The question is: How do we make failure safe so that we can make that productive change and be more resilient?

Neff’s answer is another natural response that we have as humans: compassion. “Charles Darwin, much more than talking about the survival of the fittest, he talked about survival of the kindest,” Neff said, “because this capacity to bond with others, to feel warmth, to feel care, actually helped our species to survive. And so, whereas self-criticism taps into the threat defense system … self-compassion taps into the mammalian care system.”

In addition to showing compassion for others, we must show compassion for ourselves. “Most scientists define compassion as the desire to alleviate suffering, and so, self-compassion is the desire to alleviate our own suffering,” Neff said. It’s when we lend the hand of understanding and warmth that we so often give to others to ourselves. Which is why having self-compassion can be easier than other mental health practices, like mindfulness. “The reason mindfulness is so difficult evolutionarily is because our brains actually aren’t designed to be mindful,” Neff said. “The default mode of our brain is to be mind-wandering.” While we have to more actively develop mindfulness, we already have a template for being compassionate as we interact with our friends and family members. We offer comforting food and activities. We allow for the expression of emotion. We offer solutions without judging the person.

To be clear, having self-compassion is not necessarily having high self-esteem. “Self-esteem is … a positive judgment of self-worth,” Neff said. Although that’s important for mental health, self-esteem can be built on a fragile scaffold that is easily toppled by failure.

“The biggest problem with self-esteem is that it’s contingent on success,” Neff explained. “We have self-esteem when other people like us, or when we feel that we’re attractive or when we succeed, whether it’s at school or business, athletics, whatever is important to you. Then, we have high self-esteem. But what happens when we fail? When we fail, the self-esteem deserts us. It’s contingent on success as opposed to failure. And that’s a problem, because as human beings, were constantly going to fail, and so self-compassion is the perfect alternative because self-compassion isn’t dependent on success or failure.”

OK, that sounds great and all. But maybe you’re not convinced. After all, self-deprecation has gotten you this far, right? And we’re scientists! We need to see the studies showing that self-compassion is effective. Luckily, Neff talks about that as well. “There was a great study that came out of UC, Berkeley,” he said. “The study … gave all the Berkeley students that incredibly hard [SAT] vocabulary test. … Everyone failed. … They had three groups after the failure. One group, they told the students to be self-compassionate about it: ‘Try not to beat yourself up. It happens to everyone, you know. It’s OK.’ Another group, they try boosting their self-esteem: ‘Don’t worry about it. You got into Berkeley, you must be smart.’ And the third group, they told nothing, which meant that the students were probably beating themselves up, because that’s what most of us do. And what they found is the [students who] were told to be self-compassionate about the failure … study longer and tried harder to succeed on the next exam than the people who are told nothing or [whose] self-esteem was boosted.”

So, now we have evidence-based studies telling us that having self-compassion is the best way to achieve our academic results. If we want to keep coming back to the science we love doing, self-criticism isn’t going to make us stronger. Being an ally to ourselves instead of an adversary in the face of inevitable failures is going to make us more productive and resilient.

But that’s much easier said than done. Luckily, Neff left us with a good starting point on how to be compassionate with ourselves instead of attacking our problematic selves.

Be aware that what you’re going through, whatever it is, is really tough. Don’t try to push through the feeling, and don’t try to problem solve your way out of it. Distance yourself from your struggle enough that you can approach it like a friend’s struggle.

Step 2: Remember that you’re not alone.

All humans make mistakes and struggle. It only makes sense that you will too.

Step 3: Talk to yourself like you would to a good friend.

You wouldn’t make your love and care for your friend contingent on their success. If you saw them fail, you would probably ask how you can help and not say something derogatory.

Neff has many helpful resources and tools on her website. They include meditations, journal prompts and recommended reading.

Although this won’t change my persistent imposter syndrome overnight or make my experiment anxiety disappear, it’s at least something I can do to make it better and make myself a better scientist.