More Colds in the Cold?


While we’ve all heard the tired warning to wear our coats outside so we don’t get sick, it’s fair to wonder how much validity there is to such reasoning. Are we really more likely to catch a cold in colder weather? 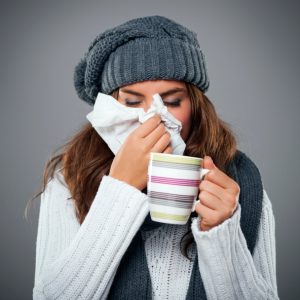 Lucky for us, scientists at Yale are looking into it. Their recent article1, published in Proceedings of the National Academy of Sciences, looked at the effect that colder temperatures had on rhinovirus growth in mouse airway epithelial cells (AECs). It was already known that rhinoviruses grow better at cooler temperatures — around 33 degrees Celsius — but the mechanisms by which this preferential growth occurred remained largely unknown. However, in this article, scientists presented new findings that suggest the mechanism is more related to impaired immune function in the infected cells than directly virus intrinsic.

Intriguingly, it is known that interferons limit viral growth and have been specifically reported to limit rhinovirus growth2, and interferon-stimulated genes are known to aid in immune response to viruses.

Taken together, these findings provide a potential mechanism by which growth of rhinovirus might be inhibited at higher temperatures. The paper goes on to further elucidate cellular mechanisms for this differential interferon production. Specifically, the researchers discovered that the recognition of viral replication intermediates, namely, dsRNA, by RIG-I-like receptors (RLRs), was responsible for the increased interferon response at higher temperatures. RLRs are part of our innate immune system and are responsible for recognition of “nonself” antigens, such as viral RNA.

The the authors’ findings suggest there is a temperature-based growth advantage in cells infected with rhinovirus, and this advantage is mediated through cell-intrinsic mechanisms. While more research is needed, this study could help explain why cold temperatures could lead to more cases of the cold virus.