Marc Edwards, Ph.D., has a vision for an innovative kind of lecture series at Johns Hopkins.

The postdoctoral research fellow is interested in featuring prominent minority biomedical scientists and clinician-researchers from across the nation in a new program that he calls the Levi Watkins Seminar Series.

“When I first came to Hopkins, I felt isolated,” says Edwards, who completed his doctorate in cellular biology at Washington University in St. Louis prior to starting his Johns Hopkins fellowship. “I was disappointed by the lack of scientists of color.” 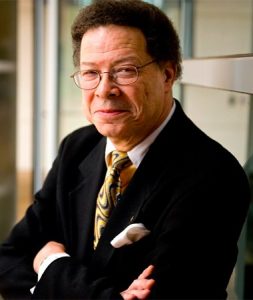 Through data from the National Science Foundation, he found that only 5 to 10 percent of all associate and full professors in science and engineering nationwide were from under-represented minority groups, including African-Americans, Hispanics, Native Americans and Native Hawaiian/Pacific Islanders1. That’s true even at Johns Hopkins.

Edwards, who is also African-American and a co-leader of the Black Residents and Postdoctoral Association at Johns Hopkins, saw that minority scientists not only at Johns Hopkins, but also at other institutions, had fewer opportunities for presenting their research advances and believed that a seminar series at Johns Hopkins would provide a forum for this group of researchers to share their progress. He talked to other postdoctoral fellows and residents, including Dionna Williams, Ph.D.; Stanley Andrisse, M.B.A., Ph.D.; and Charles Odonkor, M.D., M.A., who supported his vision and helped him to develop this initiative.

The group decided to name the seminar series after Levi Watkins Jr., M.D., professor emeritus in cardiac surgery, and the first black chief resident in surgery at Johns Hopkins.

Watkins was also an associate dean of postdoctoral affairs, founder of the institution’s first postdoctoral association and a strong recruiter of minority trainees. He died last month at the age of 70.

With an introductory lecture slated for September, the Levi Watkins Seminar Series will feature faculty members from Johns Hopkins and from other institutions, providing opportunities for mentorship and collaboration. Edwards and his colleagues plan to invite mainly young faculty who are men and women of color as guest lecturers, and to open the forum to all clinicians, researchers and trainees within Johns Hopkins Medicine.

“I met [Watkins] at an under-represented minority gala that he planned, and he was really encouraging,” he says. Just as Watkins worked to advance opportunities for minority students and faculty at Johns Hopkins, Edwards hopes to carry forward the baton, providing a new platform for minority faculty from other institutions as well.