A potential tool to combat the HIV epidemic in Baltimore is gaining attention, and it may involve an unlikely location — the church. 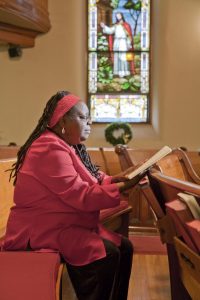 In a study recently published in the journal Archives of Sexual Behavior, researchers showed that black women who attended church regularly — at least once monthly — tended to more frequently discuss sexual health topics, such as condom use and getting tested for HIV, which could help lower rates of HIV transmission in this population.1

Lead author Terrinieka T. Williams, Ph.D., is an assistant professor of public health at Johns Hopkins whose research focuses on adolescent sexual health. She believes that using the church as a resource for sexual health education could have a big impact on this vulnerable population.

“The church is really a social network,” Williams says.

She notes that black women contract HIV at rates 20 times higher than rates of white women.2 She also says that black women tend to have strong religious commitments, with about 60 percent of black women in one survey reporting that they attend religious services at least once monthly.3 This encouraged Williams to investigate whether black women who attended church regularly also talked to others about sexual health more frequently.

Her team looked specifically at black women at higher risk for HIV transmission, including those who were younger (ages 18 to 55) and who had more than one sexual partner in the previous six months. Of the roughly 430 black women included in the study, about one-half were regular church attendees, and regular churchgoers were almost twice as likely to discuss sexual health topics with others as nonchurch attendees. Those who attended church were also significantly more likely to talk with partners about sexual health topics.

However, the study is not without shortcomings. The survey nature of the study does introduce potential bias in the results, and the findings may be difficult to apply to other populations, as many of the participants were from the inner city only.

But these are still encouraging results, and researchers believe this could translate to lower transmission rates of HIV in churchgoers. For Williams, the next step is convincing church leaders that programs to increase sexual health communication within congregations are needed.

“We [should find] ways to develop a church intervention to talk about sex without shaming,” Williams says. Forming connections with local faith leaders, she is developing an evidence-based curriculum for sexual health education. She is hopeful that these results will encourage public health workers to consider the church as a platform for advancing sexual health communication and potentially lowering rates of HIV transmission in Baltimore and beyond.

2 Centers for Disease Control and Prevention. (2012b). Slide Set: HIV Surveillance in Women. Retrieved on September 10, 2013 from http:// www.cdc.gov/hiv/pdf/statistics_surveillance_Women.pdf.