The Genetic Reality of a Jurassic World

As some of the most impressively gargantuan creatures to ever roam the earth, dinosaurs are a constant source of intrigue and inspiration. In the latest remake of the classic Jurassic novel, Jurassic World, dinosaurs again steal the spotlight by giving moviegoers’ imaginations an exquisite bite (pun intended) of life among these magnificent beasts. 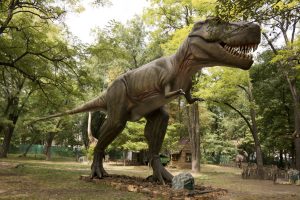 But as a scientist, I couldn’t help but examine some of the major premises of the movie and review just how genetically reasonable they are. Warning: spoilers ahead!

The most fundamental premise of the whole Jurassic franchise is that dinosaur DNA can be extracted from the preserved blood of mosquitos that dined on these beasts millions of years ago. And while fossils certainly do exist, they are rare, and well-preserved fossils are even more rare. On top of that, recovering DNA from such fossils is even trickier than simply finding the fossil.

The practice of extracting DNA from biological samples has been massively improved and standardized for many types of tissues, but the success of DNA recovery still depends largely on the quality of the sample. Typically fresh samples yield more DNA, as nuclei and DNA are still intact. Blood and other tissues that contain numerous nuclei give a higher yield of DNA than bone or teeth. Given that a mosquito fossil is not only tens of millions of years old but also has such a limited amount of tissue, it would be exceedingly difficult to successfully extract decent quality DNA from this type of sample.

Low yield and quality notwithstanding, even a semisuccessful extraction will presumably give all DNA present in the fossil: a mix including both the mosquito’s DNA and any other DNA from organisms on which the mosquito may have dined. Correctly separating which DNA belongs to the host and which belongs to the dinosaur is not a trivial practice either, especially given the heavily degraded state of fossilized DNA. In modern cases, such fragmented DNA can be aligned to a reference genome to put the story together. However, there is no reference genome for any dinosaurs, rendering such a task nearly impossible.

In the movie, the scientists deal with this incomplete genetic material in an interesting way. They use the DNA of other organisms — namely frogs and cuttlefish — to fill in the missing DNA gaps. This creates a wildly cunning, man-terrorizing “Franken-saur” of sorts, named the Indominus rex.

This practice of dissecting selected pieces of DNA from one organism and inserting them into another is commonly referred to as cloning, and any graduate student familiar with such techniques can speak to its tedious nature. But beyond the technical difficulties of molecular cloning, the science behind the movie misses in another bigger way. The idea that a single gene would control a complex trait, such as camouflage, is more fiction than reality. Most traits are complex and only work in concert with many other mechanisms. Further, because the genetic background of a hypothetical prehistoric dinosaur is vastly different than a 21st century cuttlefish, the supposed camouflage genes may not even function to give the desired trait due to the different genetic modifiers at play.

Ultimately, the genetic reality of Jurassic World may be summed up in a few words: possible, but infinitesimally improbable. But this is the stuff of movies. Making a movie about the accuracy of DNA extraction and challenges of cloning just doesn’t lend itself well to a summer blockbuster hit. So as moviegoers, we agree to temporarily suspend our skepticism in exchange for good, unfettered distractions from reality. Surely when we do that, Jurassic World is two hours of unapologetic entertainment and well worth the cost of admission.

Just remember to leave your scientist goggles at home.