Acute kidney injury, or AKI, is a major global health care problem. Each year, AKI causes 1.7 million deaths worldwide. The International Society of Nephrology has launched the 0by25 initiative to eliminate the preventable death from AKI by the year 2025.

Now, in a recent study published ahead of print in the Journal of the American Society of Nephrology, researchers from the Johns Hopkins University School of Medicine report a set of discoveries that could potentially lead to the development of a therapeutic method to prevent AKI and its detrimental consequences.

AKI develops rapidly — sometimes over a few hours — and can cause pain, weakness and permanent kidney damage. A major cause of AKI is decreased blood flow to the kidneys, a condition called ischemia. This happens during shock, excessive bleeding or trauma, or because of deceased-donor kidney transplants. Reperfusion of the kidneys is important to restore their function, but it can cause inflammation, leading to more severe kidney injury.

Hamid Rabb, professor of medicine and medical director of the Johns Hopkins Kidney Transplant Program, has been studying the inflammatory mechanisms behind AKI for several years. He was the first to show that T cells, a major group of white blood cells, are key players in the inflammatory processes that follow ischemic AKI. His team later showed that, among the different types of T cells, a group called CD4 is the major pathogenic type in this injury. More recently, his team discovered that Nrf2, a protein available in all cell types, is responsible for the regulation of antioxidant molecules that protect against the damage caused by inflammation, and therefore controls the extent of kidney damage observed after ischemic injury or chemotherapy.

Sanjeev Noel, a postdoctoral research fellow at the Johns Hopkins University School of Medicine, studied Nrf2’s role in inflammation extensively in patients with asthma and sepsis before he joined Rabb’s lab three years ago. 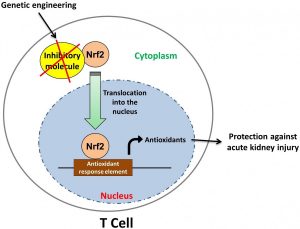 “When I came here, we tried to combine the Nrf2 concept with the T cell concept. We thought if we can somehow change the way T cells handle the inflammation, we can protect the mice from AKI,” Noel says.

To test their hypothesis, they generated mutant mice with increased Nrf2 activity in T cells and studied their resistance to AKI.

For Nrf2 to be able to increase antioxidant production, it needs to enter the cell’s nucleus. In normal conditions, some inhibitory molecules limit Nrf2’s entry into the nucleus. However, the T cells in the newly engineered mice lack these inhibitory molecules and have increased Nrf2 activity and antioxidant production. The new mice showed less inflammation and little sign of kidney damage during the 72 hours following ischemic injury, which was induced by obstructing the vessel that supplies blood to kidney for 30 minutes.

The highlight of this research was when, to show the clinical importance of his discovery, Noel isolated T cells from the mutant mice and injected them into the normal mice. After 24 hours, these mice also became protected against inflammation and showed little post-ischemic kidney injury.

While promising, Noel explains that this method needs to be refined before it can be used in clinic.

“To be able to treat humans, this method needs to be modified and improved so that we can take out the cells from the body to activate them and then put them back in the patients,” he says. The researchers are currently developing strategies to facilitate the translation of this discovery from bench to bedside.