A depiction of the greater omentum, stomach, and intestines (1900). This carbon dust work by Max Brödel demonstrates his mastery of illustrating complex tissues and intricate textures with superlative realism.

Brödel, who trained as an artist in Leipzig, Germany, in the late 19th century, immigrated to the United States to work with physicians at The Johns Hopkins Hospital. Though he had no formal medical training, he had a keen aptitude for learning about physiology, anatomy and surgery. This is distinctly evident in the finely detailed illustrations he created. Because of their realism and accuracy, his work became a vital component in the training of future surgeons and physicians.

Though the materials and techniques used today are vastly different from those applied in Brödel’s day, the program still teaches and practices the same principles of precise illustration and collaboration with physicians. For example, to complete a surgical illustration, an artist goes through three stages: the OR sketch, the rough sketch and the final sketch. The OR sketch is drawn in the operating room while observing the surgeon work. The medical illustrator must diligently heed the types of instruments used, the response the tissues have to handling and the order of steps in the procedure.

Next, the artist refines the OR sketch into a more detailed drawing used to confer with the surgeon. Together, the surgeon and the artist make corrections to ensure the accuracy of the drawing and discuss approaches to improving or augmenting the information relayed. An artist and surgeon may go through several iterations of this process until the final sketch is produced. Once complete, the final sketch is transferred to a high-quality surface or scanned for digital rendering.

Medical illustration demands fastidious and creative personalities. Students in the two-year program have extensive coursework that includes human anatomy, biophysics, cell physiology and comparative pathobiology — in addition to numerous art classes. Each year, only seven students are accepted, and these students come from myriad backgrounds. Some enter with extensive art training and then learn biology and medicine as they progress through the curriculum. Others, like Jeff Day, who had already completed medical school before deciding to pursue medical illustration, begin the program with extensive medical training and then mature their artistic skills as they work towards their degree. 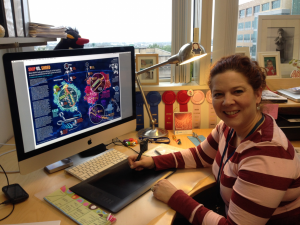 Jennifer Fairman is a both a faculty member and an alumna of the Art as Applied to Medicine program.

Jennifer Fairman, who is both a faculty member in the department and an alumna of AAM, says that she was planning on pursuing pediatrics when she serendipitously discovered that biomedical illustration was an actual career. It immediately struck her as a perfect amalgam of her medical interests and artistic talent. Her work experience has ranged from systematic entomology at the Smithsonian Institute to in-depth molecular biological diagrams describing novel genome editing technologies.

The program is one of only four accredited master’s degree programs for medical illustration in North America. Having learned of the thoroughness of the training and witnessing the extraordinary work these artists produce, I wholly understand why this program is so small and why its ilk so few. These students and professionals are at the crossroads of two seemingly disparate métiers but have successfully navigated the way to synergizing them.