“Can we take apart the legs?”

I was asked these questions by the girls with dissected frogs in front of them. I’ve been helping through a program aimed at engaging girls in science, technology, engineering and mathematics (STEM). With colleagues at the Girls Scouts of Central Maryland, I’ve helped girls dissect frogs, make catapults from spoons and spools, and talk about career options in STEM fields. 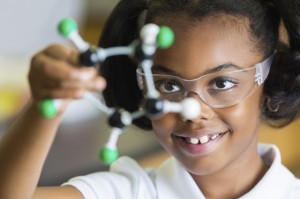 Although women hold half of all jobs in the U.S., less than 25 percent are in STEM-related positions. Beyond that, only 36 percent of doctorates awarded in science and engineering go to women. There are many possible explanations for this, but one that is particularly intriguing is based on the perception young students have of who a scientist is.

In the Draw-A-Scientist Test, when children 5 to 11 were asked to draw a picture of a scientist, common features were men in lab coats with eyeglasses, facial hair and scientific equipment. Of the 4,807 children — about half of whom were girls — only 28 of them drew pictures of women scientists, and these women scientists were all drawn by girls.

Lisa McClure, STEM specialist with the Girl Scouts of Central Maryland, shared her STEM-related experiences with me and says that the girls are interested in STEM, but when asked if they’ve ever talked to a scientist or engineer, most of them say they haven’t. In McClure’s view, “the biggest impact we can have on a girl is connecting her with someone that she can see, who can say: ‘I’m someone who’s in the field, I do it every day and I absolutely love it.’”

My involvement in the program has been as one of the “role models.” Our hope is that as younger female scientists interacting with these girls, we can help broaden their views of what a scientist is. The program also offers packages of science-related activities that troop leaders can bring to their girls.

Although there is an abundance of enthusiasm to implement the activities, many of the leaders appear hesitant to facilitate these programs themselves. Based on her interactions with the leaders, McClure thinks that many of them have been conditioned to the idea that they’re not science people, and they can’t do any of this programming with their girls. This may explain why despite the science activity materials readily available through organizations such as the National Science Foundation, most activity packages remain widely unused.

Some girls ask me during these STEM activities if I’m a scientist. Even though their preconceived ideas still make them hesitant, their concept of “scientist” is starting to change. After an activity making pendulums from tennis balls to knock down towers of shoeboxes, one of the younger girls found me and asked excitedly: “Are you the knockdown lady?” Although there has not been much research on how role models will influence girls’ attitudes to STEM later on in life, broadening the view of what a scientist looks like — even by being “the knockdown lady” — is a good place to start.