The human innate immune system is one of our body’s broadest defense mechanisms against infection. One familiar innate immune response we’ve all experienced is inflammation, which is a complex biological process that relies on signaling between cells stimulated by invading pathogens.

A detailed mechanism of the inflammatory response has been missing until recently, when a group of Johns Hopkins scientists shed light on a key step.

In July 2015, the lab of Jungsan Sohn in the Department of Biophysics and Biophysical Chemistry published a study in Nature Communications that linked the recognition of pathogenic DNA in the cell to the propagation of the inflammatory response. The investigation zeroed in on the role of the absent-in-melanoma-2 (AIM2) protein, which is a member of a family of proteins that serve as foreign-DNA sensors. 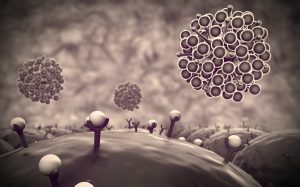 Our DNA is normally stored in the nucleus, an enclosed compartment within the interior of our cells known as the cytoplasm. When bacteria or viruses attempt to infect cells, their pathogenic DNA is dumped into cytoplasm, and it must make its way into the nucleus. AIM2 recognizes the aberrantly located foreign DNA and halts the process by binding to it. The binding of one AIM2 protein to foreign DNA allows the binding of additional AIM2 proteins in a process called oligomerization. This produces a filament that serves as a platform for the binding and oligomerization of a cascade of additional proteins, which trigger the production of cell-to-cell signaling proteins, called cytokines, and starts the countdown for cell rupture. These cytokines are released after the cell ruptures and interact with receptors on the surfaces of neighboring cells to propagate the inflammatory signal.

Interestingly, this essential AIM2 filament formation was found to be heavily dependent on the length of DNA. This suggests a regulatory mechanism by which AIM2 would only activate the immune response when it encounters DNA that is long enough to present a potential threat.

The authors also discovered that an additional mechanism for inflammatory propagation emerges when AIM2 is overexpressed. High concentrations of AIM2 actually facilitate auto-oligomerization without DNA. While higher amounts of AIM2 filaments would be very efficient at searching for foreign DNA, it could also backfire if the subsequent proteins assemble on AIM2 before it finds DNA. This could lead to persistent inflammation activity that is not triggered by the presence of a pathogen, which is the hallmark of several autoimmune disorders.

“I think the exciting thing about what we did is combine various observations made about this system and wrap it into a simple little package that is already beginning to generate more hypotheses,” says Seamus Morrone, lead author of the paper and a fifth-year graduate student in molecular biophysics. “It also presents a tempting model for how these systems go awry and cause autoimmune disorders, but those are experiments that will have to be carried on by our lab’s next generation of students.”