Anaplastology Combines Medicine and Art to Help Patients in Need


Juan Garcia is an associate professor in the Department of Art as Applied to Medicine, a certified clinical anaplastologist and the director of the Johns Hopkins Facial Prosthetics clinic. While earning his B.S. in biology, Garcia realized that his talent for and interest in art were too strong to pass off as a mere hobby. Thus, Garcia also earned a B.F.A. in graphic design and illustration, and continued his training in the Johns Hopkins Art as Applied to Medicine graduate program. 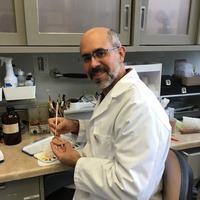 Like many medical artists, anaplastologists synergize two seemingly divergent areas of expertise into one craft. In contrast to medical illustrators, however, anaplastologists interact directly with patients. Thus, in addition to needing expertise in sculpting, painting, anatomy and materials science, anaplastologists must also be well-versed in clinical procedure, insurance structure and patient-clinician dynamics.

The landscape of those dynamics can be difficult to navigate. Patients who seek Garcia’s help may have suffered a serious injury, undergone surgeries resulting in the removal of extensive tissue or dealt with developmental conditions that affect physical formation. Garcia’s goal is to help restore a sense of normality for his patients, and it can be an arduous task.

To create one prosthesis, Garcia typically has three to four six-hour sessions with a patient over the course of a few weeks. Given the often-sensitive circumstances surrounding the sessions, the tenor of Garcia’s interaction with his patients is empathetic, yet he also feels a responsibility to prepare his patients for how others may react to them. “I tell my patients to expect people to be curious and for some to boldly ask questions about their prosthesis.” If asked the question himself, his response would be that people are different from one another in many ways, and this is just another kind of difference. 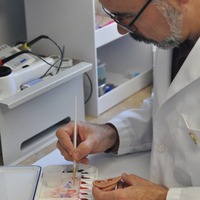 Juan Garcia provides some finishing touches to a prosthetic ear in his workshop here on the Johns Hopkins School of Medicine campus.

A challenge in anaplastology is avoiding the uncanny valley in the creation of a prosthesis. The concept of the uncanny valley was first described in 1970 by Japanese robotics professor Masahiro Mori. It describes the affinity a viewer feels for an object as it approaches lifelike or human verisimilitude. As authenticity increases, so does the affinity of the viewer for the object — until the similarity is close to the real thing. At this point, the viewer may experience a feeling of revulsion toward the object. Especially in the case of a humanoid robot, or a prosthesis, the reason for this revulsion is that the smallest differences between real and unreal are amplified because of the viewer’s intrinsic knowledge of what “real” should look like.

This is a challenge that Garcia has successfully met time after time for each patient. According to the Board for Certification in Clinical Anaplastology, there are only about 30 anaplastologists nationwide, and Garcia is the sole anaplastologist at Johns Hopkins. Regardless of the rarity of his discipline, he remains determined to help patients. It is because of talented people like Garcia that many patients in need can begin to live normally again.