New Technologies Bring Surgery into the World of Big Data

“Robots are more accurate than humans, but humans are far smarter than robots. How do we bring these two together so that human intelligence and perception are complemented by robot precision and control?” says Greg Hager, professor of computer science and the director of the Malone Center for Engineering in Healthcare. As his statement above suggests, he is using robotics to improve the field of surgery. He and his team of engineers take advantage of the modern-day ability to collect, manage and manipulate large-scale amounts of data to augment the capabilities of a doctor performing a surgery. 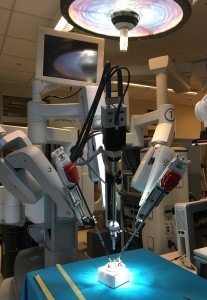 The robotic surgical system. The system can have up to four robotic arms, one of which is the high-definition 3-D camera. Here, the system is shown trained on a practicing platform.

In collaboration with the Laboratory for Computational Sensing and Robotics, Hager and his team record certain robot-assisted surgeries performed with a minimally invasive robotic surgical system. Hager’s team was the first and still is one of the few groups that record surgeries performed on a robotic platform.

Anand Malpani, a graduate student working with Hager, says that under several IRB-approved studies, their group has recorded more than 100 robotic and nonrobotic surgeries. Their objective is to collect enough data regarding all the features of a surgery (like the specific techniques implemented and the movements made for each technique) to build models that can begin to represent what a successful surgery is.

The larger the data set, the better the modeling can be. For instance, I asked how a robot might respond if presented with a rare, never-before-encountered human physiological aberration. Hager answered: “That’s the power of big data. I suspect once you’ve seen a few million people, you’ve probably seen 99.99 percent of the variants you’re going to run into.”

Having models that correlate specific techniques with specific outcomes has multiple valuable possibilities. One is to provide a venue for less experienced surgeons to practice in simulations that can inform on technique and provide suggestions for improvement or alternatives. Another possibility is to have vehicles for skill evaluation, such as in the case of board certification maintenance. 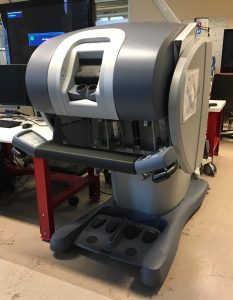 The robotic surgical system console. The surgeon sits at this console, looks through the viewing panel and directs movement of the robotic arms with the controls.

Given our society’s fascination with the potential capabilities of robots as reflected by the entertainment industry, I asked Hager about his thoughts on the MedPod from the movie Prometheus. He replied: “The one that does surgery? The interesting thing is the fact that [the human character] could somehow override it! When I talk about what we do, people often say, ‘When will my surgeon be a robot?’” Hager says we are still decades away. “If you can’t build a robot to reliably open a door, [how can you] build a robot that can reliably manipulate variable anatomy that, even as you manipulate it, begins to change?”

However, Hager remains optimistic about the possibility. “People thought, five or 10 years ago, that [inferential processes, like speech recognition] would be very difficult to automate because they thought you had to have very deep knowledge. But it turns out that you don’t need to have a lot of deep knowledge — you just need to have a lot of data and the right model.” With the innovations we have seen in facial recognition and driverless cars, I expect Hager and his scientific descendants will someday collect enough data to accomplish their goals.