Multiple sclerosis afflicts millions but defies most clinical treatments. For reasons we do not clearly understand, the immune system of an individual with MS attacks myelin, the insulating tubing that envelopes neurons and speeds up brain communication. When myelin is degraded in MS, the brain cells that make myelin, called oligodendrocytes, die. Moreover, for some reason, oligodendrocyte progenitors fail to make new oligodendrocytes to replace the lost myelin. An ideal therapy would suppress the immune system and encourage progenitors to repopulate the brain with oligodendrocytes to replace the damaged myelin. 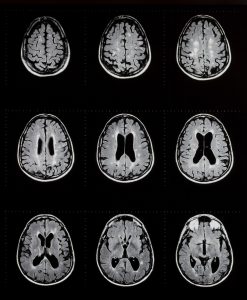 While promising in theory, this approach is complicated by another cell type. In a healthy brain, supporting cells called astrocytes disperse nutrients and recycle neuronal signaling molecules. But in the case of injury or disease, including MS, astrocytes become reactive. Reactive astrocytes form a defensive border around the site of injury, quarantining damaged brain areas from the surrounding healthy cells. In their rush to protect, reactive astrocytes change the local brain environment in a way that inhibits the generation of new oligodendrocytes and the replacement of myelin. Even if clinicians attempt to promote remyelination in patients with MS, reactive astrocytes stand in the way, creating a huge therapeutic road block.

In a recent study, scientists from the Children’s Research Institute revealed a signaling mechanism between astrocytes that inhibits remyelination and oligodendrocyte regeneration. Following myelin degeneration in animal models as well as in humans with MS, reactive astrocytes produce a signaling molecule called endothelin-1 (ET-1). Researchers knew that ET-1 forces astrocytes into a reactive state and inhibits oligodendrocyte generation and myelin production, but the target of the ET-1 signal was previously unknown. The new research, published in Cell Reports, shows that astrocytes — but not oligodendrocytes — strongly express ET-1 receptors and are thus receptive to this ET-1 signal. This indicates that reactive astrocytes must signal to themselves via ET-1 to inhibit progenitors from creating new myelinating oligodendrocytes.

The researchers created mice with MS-like myelin degeneration by injecting the myelin-digesting chemical lysolecithin into the brain. When the researchers blocked ET-1 signaling between astrocytes, the hold on oligodendrocyte progenitors was released, and oligodendrocyte generation improved threefold. Following myelin degeneration, the new oligodendrocytes in the treatment conditions replaced 30 percent more myelin than the untreated mice. These results explain the origins of ET-1’s inhibitory effects on remyelination but raise the intriguing question of how astrocytes communicate their inhibitory message to oligodendrocyte progenitors — and exactly what that message is.

This study adds to a growing body of research aiming to better understand the diseased brain environment and provides a target for future MS drug discovery. Diseased cells do not exist in isolation; they live in a milieu of healthy cells, which react in ways that both help and hinder healing. As we see in the current study of ET-1 signaling, sometimes tweaking the healthy milieu is more effective than trying to repair abnormal cells

« The Promise of Medicine and the Butterfly Effect: Can Small Changes Create Big Effects? » How I Want to Die: Teaching Ethics and Death in Medical School