Building Brain-Machine Interfaces That Are Here to Stay

In 2012, Jan Scheuermann made headlines when she took a bite of chocolate. While that sounds like a simple feat, in her case, it was extraordinary. Her brain controlled a robotic arm to take that bite — her first one unaided after almost a decade of paralysis in all four limbs. Other history-making successes with brain-machine interfaces (BMIs) followed, allowing people with limited or no control of their limbs to interact with their world once again. 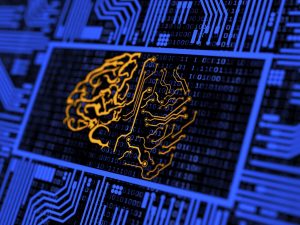 The Johns Hopkins University Applied Physics Laboratory is one group leading the BMI field with its modular prosthetic limb (MPL), the device used by Scheuermann as an initial trial in humans. To establish the connection between brain and machine, microelectrode arrays, grids of 96 tiny, needlelike electrodes, are implanted into an area of the brain controlling arm muscle movements.

Then, the activity of specific groups of neurons can be directly recorded by these arrays, sent through algorithms that decode the meaning of the activity and assigned to corresponding movements of the MPL. The person thinks about moving their arm, and the MPL follows suit. The MPL has nearly the entire range of human arm movements and allows for remarkably natural and fluid motions.

But there is an unfortunate truth about these astonishing devices. A BMI’s success is fleeting. Unfortunately, recording device technology has lagged behind that of prosthetics. Microelectrode arrays, for example, have had the same basic design for about 25 years. Although these arrays have high resolution at first, they begin fighting a losing battle as swarms of the brain’s support cells encroach on the implanted electrodes and quarantine them from neurons, effectively blocking the recording of any neuronal activity. The result is that the brain is only able to control a BMI for a few years at best. This short-term functionality is a major roadblock if a brain-linked prosthesis is going to make it to the clinic to restore autonomy of patients who are unable to use their own limbs.

Some research groups have tried to get around the bioincompatibility of microelectrode arrays by using electrocorticography (ECoG, pronounced “ee-cog”). In this technique, a sheet of flat circular electrodes sits on the brain’s surface and records underlying activity. ECoG provides a lower-resolution signal compared to microelectrodes, as the activity of many neurons is being averaged together, but with the benefits that the brain is less perturbed and more area is covered. ECoG is like standing outside of a stadium while listening to a crowd chanting inside, while microelectrode arrays put you in the stands, hearing individual fans’ voices in the crowd.

Although the Johns Hopkins University researchers achieved remarkable single-digit dexterity in their most recent trials with the MPL by using ECoG, they note in their published study that the accuracy observed “would not meet performance requirements of a functionally useful prosthetic device.” It is possible that with more practice, the accuracy would increase, but there is still a long way to go to improve ECoG designs.

Another avenue to pursue is attempting to make microelectrode arrays more brain-compatible. One material called PEDOT:PSS may be a solution. PEDOT:PSS is an organic polymer that conducts electricity well and is stable in a wet and salty environment like the brain. In a recent study, it was found to be compatible with neurons and seems to reduce reactivity of supporting glial cells involved in the scarring process.

One application of such technology has been the development of the NeuroGrid — a bendable array of PEDOT:PSS microelectrodes, each a single neuron wide — which can conform to a curved surface like the wrinkly exterior of the brain. The NeuroGrid is basically supercondensed ECoG, but because each microelectrode is so small, it is able to resolve single-neuron activity at the same time as populationwide activity.

These encouraging advantages could make PEDOT:PSS devices like the NeuroGrid the next implanted recording arrays for BMIs, and it will be exciting to see further trials of PEDOT:PSS for human applications.