You may expect that defining something as living or dead would be relatively straightforward, yet nearly every scientist you ask for a definition of what constitutes life will give you a different answer, often emphasizing the importance of their area of expertise. Even with widespread disagreement in the details, generally agreed-upon characteristics of life include being able to respond to stimuli, utilize energy and reproduce under their own capacity. 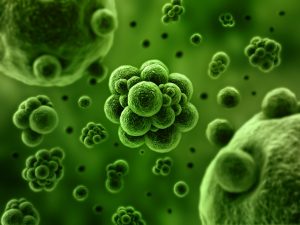 By this basic definition, the simplest self-sufficient unicellular bacteria are classified as alive, while viruses that require a host cell to reproduce fail to pass the test even if their genomes are larger than some common bacteria. With advances in synthetic biology and genomics, it seems likely that we are on the verge of having to yet again redefine the further blurred boundary between what qualifies as alive and dead.

In a recent article published in Science, researchers demonstrated a new milestone for the minimum number of necessary genes for a self-sufficient bacterial cell they termed syn3.0. The group’s definition of life for syn3.0 comes with the large caveat that it can only survive under optimized laboratory conditions, in which nearly all macromolecular precursor molecules (amino acids, nucleotides, lipids) are provided in rich, nutrient medium. Yet provided these nutrients, syn3.0 is capable of living with a minimum genome of only 473 genes, most of which are involved in replication of DNA and transcription to mRNA; this is in comparison to the common bacteria E. coli which has 4,000 to 5,000 genes.

Besides its small genomic stature, the most surprising detail about the syn3.0 genome was the unanticipated lack of understanding of its content. More than 30 percent of the genes of syn3.0 currently have no known function! In this fashion, while pushing the boundary of what qualifies as life, we have revealed just how little we understand about the necessary molecular components for simple life, much less Homo sapiens with our nearly 25,000 genes.

As levels of basic science funding have effectively stayed stagnant in comparison to more applied research in the U.S. over the past half-century, studies such as this one serve as a gentle reminder that even now we do not fully understand our most basic model organisms. The technologies that made this study possible have only recently become cost-effective, thanks primarily to research funded by the U.S. government, allowing rapid sequencing and assembly of DNA. The incredibly rapid drop in the cost of DNA sequencing (vastly outstripping Moore’s law) has unlocked many new areas of study in biology and greatly assisted in our understanding of the connectivity of life on earth.

As a self-sufficient cell, syn3.0 may qualify as life, but as with much science, it raises more questions than it answers. This article serves as a prime example of how even cutting-edge science can reveal to us how far we need to progress to truly understand our little corner of the universe.