Kaitlyn Sadtler, a freshly minted Ph.D. from Johns Hopkins’ Cell and Molecular Medicine Graduate Program and Jennifer Elisseeff, Ph.D.,  recently had her thesis work published in Science, where she demonstrated the necessity of the adaptive immune system in fostering a pro-healing response following biomaterial implantation to provide scaffolding for cell growth and tissue repair. Extracellular matrix-derived biomaterials — such as the ones used in her paper — can be used to help mend muscle following otherwise irreversible damage induced by traumatic injury. The adaptive immune system was previously thought to be an adversary to a regenerative response following injury, but through a series of elegant experiments, the authors of this paper showed that the adaptive immune system is actually critical to its functioning. 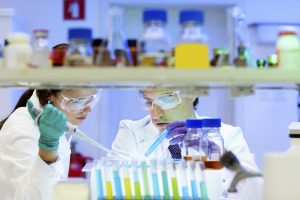 In many ways, this study is an excellent example of how new collaborations can bring together researchers from different areas to make novel discoveries in the biosciences. The perspectives that different types of scientists — engineers, biologists or immunologists, for example — bring to collaborations are often quite different.

Very little of biology can be categorized in a binary, black-and-white fashion, which does not always harmonize well with the reductionist approach taken by many scientists and engineers working in a field outside their primary area of expertise. Yet many biologists working alone do not often have the systems engineering approach required to engineer and apply their understanding of biology to create medical products that are translatable into the clinic setting. Where there has historically been little interdisciplinary collaboration between researchers in different departments, today, the most novel discoveries are often the product of highly integrated and collaborative work.

For the Elisseeff lab, Sadtler played a large part in fostering this relationship with many of the immunologists now involved in collaborations, including Drew Pardoll who is now director of the new Bloomberg~Kimmel Institute for Cancer Immunotherapy.

Studies that are published in Science rarely arise without extensive planning, and Sadtler can trace the roots of this study back to her first meeting with Elisseeff, when she was planning her initial graduate school rotation project in early 2013. The Elisseeff lab had previously done research engineering materials to support muscle recovery after traumatic injury or surgery, which led them to investigate the immune response to the materials they were using, including extracellular matrix-derived scaffolds that could support cell growth. 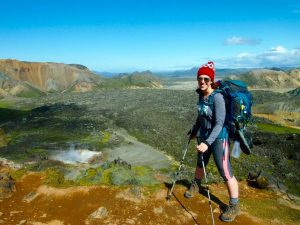 Sadtler, hiking in Iceland during her PhD, managed to find time to travel while doing exceptional research.

Sadtler came to Johns Hopkins following a post-bac year at the National Institutes of Health under immunologist Ronald Schwartz, and was interested in transitioning into biomedical engineering research. With the Elisseeff lab’s history of excellent biomedical engineering and interest in studying interactions with the immune system, Sadtler was an ideal candidate for branching these two disciplines. In the end, her work proved to be exactly the kind of high-risk, high-reward research that new collaborations often aim for.

The future is bright, both for Sadtler, who intends to pursue a career in academia following completion of her postdoctoral studies, and for interdepartmental, collaborative studies that allow for scientists and engineers coming from different perspectives to work together to make new discoveries that drive both fields forward.