An Abdominal Window into the Gut’s Nervous System


As neuroscience has advanced rapidly, unraveling many mysteries of neural circuits in the brain and spinal cord, the gut's enteric nervous system has remained somewhat of an enigma. Now, with a window embedded in the abdomen, researchers can periodically monitor the gut's neurons in a living animal over a period of months.

Sometimes nicknamed "the second brain," the enteric nervous system is a network of around 500 million neurons enmeshed in the lining of the gastrointestinal (GI) system — five times more neurons than the spinal cord. In addition to bidirectional communication with the brain, the enteric nervous system works independently of the brain and spinal cord to control rhythmic gut movements. Dysfunction of or damage to the enteric neurons are associated with severe GI disorders, such as inflammatory bowel disease, which results in more than 21.7 million hospitalizations each year. 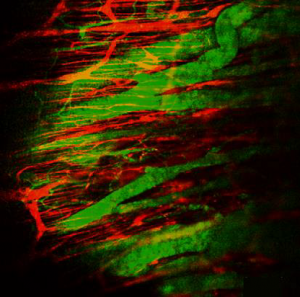 Despite its importance, understanding of the enteric nervous system has lagged behind due to a plethora of previously insurmountable challenges. Unlike the brain, the gut is constantly moving, making recordings of neurons' electrical properties highly unstable and periodic imaging of the same neurons nearly impossible. The GI system is also sensitive to physical perturbations, like pressure and movement, and becomes inflamed quickly, changing the very properties of the neurons under observation.

In a collaboration between Cornell University, Duke University, and Johns Hopkins University, a device was created to overcome previous limitations, and unlock potential discoveries of enteric nervous system function. Overall, the device looks a bit like a submarine window on the belly of a mouse. It consists of a three-dimensional printed implant that fits under and around the intestines, holding them against a circular glass plate fixed to the belly of a mouse by a titanium ring. The glass plate also holds tiny, transparent graphene electrodes that can record neurons' electrical activity.

With this new tool, the researchers took the enteric nervous system to the cutting edge of modern neuroscience. Utilizing a technique called optogenetics, neurons are genetically altered to have ion channels that respond to flashes of light. The experimenters shined light through the glass window onto the neurons, thereby electrically activating them. The corresponding electrical impulses were simultaneously recorded by the graphene electrodes in the window. The researchers also characterized the responses of enteric nerves to different injected or ingested chemical compounds to which the neurons are known to respond.

Future Insights into the Gut-Brain Connection

This device has come at a time when the gut has been in a great deal of scientific limelight. Scientists continue to discover interesting connections between the gut and brain, including influences of the gut microbiome on mood. Future experiments can make use of the device to gain front-row access to enteric nervous system responses, to further investigate intestinal diseases, fecal transplants, changes in diet and obesity. Perhaps with tweaking, researchers may even be able to simultaneously observe brain and enteric nerve activity, and map functional circuits in living animals.

Share This Post
gut-brain connection
« Where the Presidential Nominees Stand on Science and Technology » Zombie Genes: Life after Death