When I first decided I wanted to go to medical school, I never thought about the fact that I would see some of my patients die. The attraction of medicine is that a physician has the opportunity to help people live long, healthy lives. Unfortunately, death is a reality of life, and medicine cannot always heal people. While several patients I have seen have had “poor outcomes,” there is one patient who I know I will always remember. 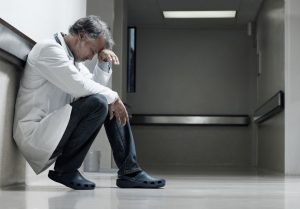 He was a young man. While he was very sick, he seemed to be getting better. Given his age and his steady improvement, I expected that though he had weeks left in the hospital, he would eventually be able to leave and go home.

Instead, while we were rounding one day, we saw his heart slow down on the monitor. The nurse walked into the room, and he had no pulse. The next several hours are a blur, with few moments of clarity. He was young, he was a survivor, and so we worked hard to get his heartbeat back.

And we did so, at first. But medicine has its limitations, and after his heart stopped for the second time, we all knew he wasn’t going to live through the day. Still, per wishes of his family, we brought him back several more times before we were finally unsuccessful. He spent the last month of his life in the hospital, away from his family and loved ones, only to die a sudden, prolonged and unexpected death.

I spent the rest of the day stunned, yet oddly functional. I continued to care for other patients — checking up on labs, writing transfer notes, updating families. When the shock finally faded, all I felt was immense grief. We had lost a young life, and a family was in immeasurable pain.

My conscience was flooded with questions. Was it something we did to him in an attempt to make him better that caused this? Or something that we missed? If we had been more vigilant, could we have saved him? Was bringing him back all those times, after we knew he wasn’t going to make it, the “right” thing to do?

Since that particular young man, I have seen many patients get sicker and die. Each time, I feel the same grief. And each time, I still wonder if we missed something. Even scarier, did we do something that caused them to get worse? So many treatments and medications have side effects. What if, in our attempt to save someone, we hurt them?

As that young man was dying, my attending physician told me that medicine was not pure science, and that I could not think of treatments in terms of risks and benefits alone. When a patient might not make it, it is not only about the physicians; it’s about what and how the families are going to feel. Do they feel we gave up on their loved one? More importantly, do they feel like they gave up on their loved one? More often than not, that will be what determines our goals of care and our medical path.

It is an impossible wish that all patients will have great outcomes, that they will live full and healthy lives. But it isn’t impossible to hope that they all have excellent care, and that they can live and die with dignity, with them and their families knowing we did everything we could. While I have spent the last few years striving for clinical excellence, I now know I need to start developing that second dimension — a philosophy of medicine that will allow both me and my patients to deal with inevitable death.

Ruchi Doshi ⋅ A Day in the Life Mortality ⋅