From Soup to Vents: Hypotheses for the Origin of Life


In the early 1950s, Stanley Miller and Harold Urey created one of the most well known soup recipes. This soup didn't have chicken and noodles, but instead was an amalgamation of ammonia, methane, and hydrogen gas cooked with bursts of electric shocks and high temperatures. After a week of brewing, what remained was a thick tar containing small amounts of organic molecules — the building blocks of life. While it probably tasted awful, this seminal project devised the first tested hypothesis of where we came from, the origin of life on primordial Earth. 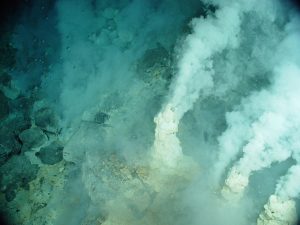 As with many hypotheses in science, Miller and Urey's were eventually refuted as experts' assumptions of the early Earth environment changed. In the late 1980s ideas emerged that hydrothermal vents may be more favorable environments to kick start life, as they produce the same chemical processes that all cells use to generate energy: proton gradients across a membrane.

To create energy, protons flow freely from high to low concentration through molecular turbines, the way a river powers a water mill. Similarly, early Earth's alkaline hydrothermal vents spewed hydrogen gas through microscopic tunnels in the Earth's crust into an acidic ocean. The resulting hydrogen and ion gradients along the rocks could be harvested by any opportunistic "proto-cells" with the right turbines seeking an energy source for chemical reactions.

For a while, these thoughts remained without substantial evidence until some researchers created artificial hydrothermal vent environments in the lab that churned out preliminary components of RNA and DNA. But last month, some of the most convincing evidence for a hydrothermal vent origin of life was published in Nature Microbiology. In order to get a better idea of what primitive life looked like — and what cellular functions were necessary for it — the team from the Heinrich Heine University Düsseldorf scoured sequenced genomes for gene families that traced back to the last universal common ancestor (LUCA) — the predecessor from which all current life evolved.

Based on LUCA’s supposed genome, the researchers hypothesized LUCA's ecology. Among basic genes for protein synthesis and basic cell maintenance, LUCA possessed genes for synthesizing ATP, a universal cellular energy source, as well as genes for harvesting ion gradients that power the ATP generators. However, LUCA did not possess the means to produce a proton gradient itself; the hydrothermal vent-generated proton gradient must have been necessary for LUCA to generate energy.

So have we unlocked all the answers to how life began? Well, not really. The study's hypothetical LUCA begins with DNA. However, the majority of origin of life scientists believe in an RNA World, in which early cells contained only RNA which played dual roles as both genetic and functional material, with DNA evolving later. This means there were potentially DNA-lacking predecessors to this study's LUCA. The links between an abiotic Earth, the first proto-cells with RNA, and LUCA have yet to be elucidated.

However, these new data tell us a great deal about why cells are designed the way they are and open doors to new lines of questioning in evolution, microbiology, and biochemistry. And while science will never know for certain LUCA’s genome or where the first cell was formed, it at least helps satiate our desire to know how life began.