In spite of efforts to diversify the biomedical workforce, a significant proportion of the United States population remains grossly underrepresented in the science, technology, engineering and mathematics (STEM) fields. Nationally, women hold less than 25 percent of scientific research faculty positions, while African-Americans and Latinos account for 7.2 percent of academic faculty, surprising statistics given that these groups are predicted to collectively account for the majority of the U.S. population by 2050.

Lack of diversity in the scientific workforce is concerning, as it implies a loss of scientific talent and an underutilization of the nation’s intellectual capital. From a public health perspective, diversifying the biomedical workforce would help eliminate biases in clinical trials and pharmaceutical development, ensure that physicians and health care workers reflect the populations they serve, and help address disparities in the American health care system.

Recent evidence suggests that diversity is not only beneficial, but also essential for scientific excellence. It has been shown that when individuals have to work with others who look different than them, they tend to prepare more thoroughly and produce better-quality work as a result. Diversity benefits the whole team, as it drives innovation and forces consideration of new and alternative perspectives.

According to Hannah Valantine, chief officer for scientific workforce diversity at the National Institutes of Health, tackling diversity in the STEM workforce requires a scientific approach, especially given the inherent complexities of this challenge. Valantine spoke at the first annual Excellence in Diversity Symposium, organized by the Johns Hopkins Diversity Postdoctoral Alliance Committee on Sept. 27, 2016. 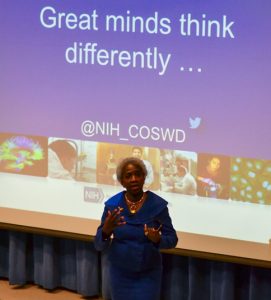 Hannah Valantine gives a talk at the first annual Diversity and Excellence Symposium at Johns Hopkins.

This event showcased high-quality research by students, residents, postdocs and faculty members from ethnic minority backgrounds across various departments at Johns Hopkins. I presented a poster at the symposium and was impressed by the breadth and depth of scientific endeavors. The event underscored the indispensable role of diversity in advancing biomedical research at the institutional and national level.

Similar to how we approach scientific discovery and research, Valantine emphasized that a rigorous exploration of the diversity question is vital to addressing four key challenges: the need for evidence demonstrating the impact of diversity on the quality of scientific output; development of evidence-based approaches to recruiting and enhancing diversity of scientific talent, addressing barriers to institutional workforce diversity; and designing scalable, long-term strategies to eliminate barriers to career advancement and sustain diversity in the scientific workforce nationwide.

From a broader perspective, the issues that plague the scientific workforce echo the racial tensions that have recently regained national focus in the United States. It appears that psychosocial factors, such as unconscious biases and stereotype threat — a term used by social scientists to describe when people are, or feel themselves to be, at risk of conforming to stereotypes about their social group — play a big role in American society and influence who is recruited to, as well as who chooses to leave, careers in biomedical research. Stereotypes that contribute to an individual’s sense of belonging in science have been shown to affect performance. However, evidence from a recent randomized control trial suggests that it is possible to mitigate the negative effects of stereotype threat through reframing adversity as a common experience.

Science therefore appears to hold the key to unlocking the answers to its own diversity problem. Of the many challenges facing mankind in the 21st century, the U.S. seems to be uniquely positioned to tackle diversity in biomedical research given its wealth of ethnic and cultural diversity. It remains to be seen what new insights would be garnered from a scientifically rigorous approach to this problem.

Diversity in Medicine Has Measurable Benefits
Drawing upon our racial and cultural differences is crucial to executing our mission to improve health. Read more insights from Dr. Paul B. Rothman, Dean of the Medical Faculty and CEO of Johns Hopkins Medicine.

Watch: Summer Internships Aims to Boost Diversity in Medicine
The Johns Hopkins University School of Medicine started the Summer Internship Program  in 1995, with the goal of increasing the number of underrepresented students at the school. Since then, more than 750 students have had the chance to spend the summer engaged in biomedical research at Johns Hopkins, giving them the opportunity to experience both life in the lab and in Baltimore. Watch our video to learn more.

Encouraging Young Women in STEM Careers.
Although women hold half of all jobs in the U.S., less than 25 percent are in STEM-related positions. Learn more about initiatives to reverse that trend.

Share This Post
diversitySTEM
« The Making of a Terrorist » Nobel Prize Winning Research May Lead to New Therapies for Cancer, Alzheimer’s