Today, adult women have a wide variety of choices of birth control methods, including daily pills, implants, IUDs and others. However, there is still no equivalent method of birth control for men, who have historically been limited to withdrawal, condoms and sterilization, placing the burden of pregnancy prevention on females.

A recent study, co-sponsored by the United Nations and published in The Journal of Clinical Endocrinology and Metabolism, aimed to change this by testing the safety and efficacy of a new male contraceptive. The study was a phase II clinical trial and included 320 healthy men. The men were injected with a combination of testosterone and norethisterone — a derivative of a female hormone found in many birth control pills — with the expectation that the additional testosterone would send a signal to the brain to shut down testosterone production due to already sufficient levels. As a result, sperm production would also drop significantly, rendering the men temporarily sterile.

Initial results were very promising and suggested that the drug was quite effective. The contraceptive was 96 percent effective in preventing pregnancy in the men’s monogamous partners, and after the men stopped receiving shots, most returned to fertile sperm counts within an average of 26 weeks. However, the men reported a number of negative side effects that were deemed to be too serious to continue the trial. Negative side effects reported by the participants included acne, increased libido, emotional disorders, injection site pain and muscle pain. One man developed severe depression, and another tried to commit suicide, although this was later determined to be unrelated to the study. Several men dropped out early, and later, two independent committees decided to cut the study short.

This caused a row of controversy, as women pointed out that many of the reported side effects were similar or less detrimental than the side effects of many female birth control options already on the market. However, to understand whether these effects were truly minor or not, it is critical to objectively compare them with the available data on female contraceptive use. 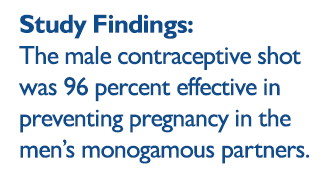 In the male birth control trial, 4.7 percent of men experienced mood swings and 2.8 percent experienced depression. On the other hand, when using an IUD, which was approved by the FDA in 2015, 5.2 percent of women reported mood swings and 5.4 percent reported depression. Besides these side effects, the women also experienced abdominal pain, ovarian cysts, headaches, acne and heavy menstrual bleeding. IUDs can also, in rare instances, cause sepsis or perforate the uterus. Similarly, hormonal birth control pills have long been known to cause headaches, nausea, cramps, yeast infections, mood swings and weight gain. Most recently, a study of more than 1 million women, published in JAMA Psychiatry, found that women who used combination hormonal birth control were 23 percent more likely to be prescribed antidepressants.

Thus, it appears that the FDA-approved female contraceptives currently on the market have side effects that are just as bad, if not worse, than those experienced by patients during the injectable male birth control trial. But given that there is no urgency for pharmaceutical companies to develop male birth controls, the field is content to wait until safe and effective methods of contraception are developed. Currently, there is a highly promising nonhormonal method being studied, called Vasalgel, a gel polymer that is injected in the vas deferens of the male. The vas deferens is a narrow tube that carries sperm. The polymer forms a physical barrier and prevents the passage of sperm through the vas deferens. This promising approach is reversible since a second injection can dissolve this polymer, effectively restoring the flow of sperm, and may be a first step toward removing some of the burden of pregnancy prevention from females. A male contraceptive pill, on the other hand, is likely still decades away.