In Outliers, Malcolm Gladwell observes that in many different fields, it seems to require roughly 10,000 hours of deliberate practice to become an expert. By my most conservative estimate, Willard Standiford has spent 119,250 hours practicing medicine. He retired at the end of 2016, 50 years after beginning his career as a pediatrician.

I met Dr. Standiford last January, on the first day of my longitudinal ambulatory clerkship. Designed to run alongside the Genes to Society organ systems curriculum, the longitudinal clerkship enables Johns Hopkins medical students to develop a deep relationship with a single physician and patient group. For 12 months, we spend one afternoon a week in the same clinic working with the same physician to see patients and practice our craft. Nearly every Tuesday of 2016, I scarfed down lunch, topped up my coffee and caught a ride with several classmates to Dr. Standiford’s Columbia office. Then we went to work.

Our practice was structured according to the credo of medical education: “See one, do one, teach one.” First, you observe and ask questions. Then, you practice under supervision. Finally, you teach others, clarifying and solidifying your own knowledge in the process. I began by watching. I had learned the physical exam on adult patients. As it turns out, there are different considerations when the patient may begin wailing at any moment. (Tip: Listen to the heart and lungs before you stick a tongue depressor in their throat.) Within a few weeks, I was seeing patients on my own. I spoke with and examined them, and then I communicated what I learned to Dr. Standiford. The two of us returned to the room for Dr. Standiford to fill in the holes and discuss the treatment plan with our patients and their families. 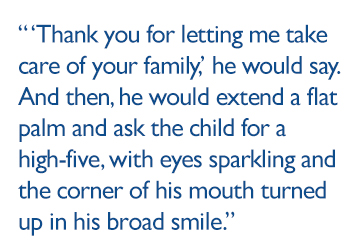 Dr. Standiford invited me to be a part of every interaction with a patient. During well-child checkups, we worked side by side to examine the patient together. Dr. Standiford always began with the hands. He took the patient’s right hand in his while I took the patient’s left, inspecting the skin, nails and joints. Our eyes and fingers moved up to our respective shoulder joint, and then to the face and eyes.

After looking in the right ear, he handed me the otoscope to look in the left one. When we reached the heart, our stethoscopes roved over the patient’s chest in a pattern that must have seemed random to child and parent, but which was actually a coordinated effort to listen to all four heart valves without tangling stethoscopes.

We must have made a curious sight: the 80-something pediatrician in jeans and a flannel shirt, and the 20-something medical student in a too-crisp white coat, both huddled around a young patient. It’s a scene that would not be out of place 50 or even 100 years ago: the apprentice learning from the master doctor. There was so much he could teach me. Fifty years of accumulated knowledge and skill; 50 years of explaining illness to parents, counseling healthy habits and comforting frightened children — for a 24-year-old, it’s difficult to conceptualize spending two lifetimes refining a single art.

As our year together, and Dr. Standiford’s practice, drew to a close, families began to say goodbye. For five or six Tuesdays in a row, virtually every parent I met lamented Dr. Standiford’s retirement. They teased him about what he would do with all his free time and thanked him with heavy voices for watching over their children. “Thank you for letting me take care of your family,” he would say. And then, he would extend a flat palm and ask the child for a high-five, with eyes sparkling and the corner of his mouth turned up in his broad smile.

When the Differential is Wide-Ranging
Infectious, oncologic and rheumatic conditions were all likely suspects for this puzzling disorder. Read more about how pediatrician Willard Sandiford faced the medical mystery plaguing his patient.

Carson Woodbury ⋅ A Day in the Life curriculum, Genes to Society, medical school ⋅