Tools of the Trade


Within the medical field, naming a surgical instrument is often considered the epitome of success. Such a major contribution not only cements the lucky surgeon’s name in history books for decades to come, but also means that his/her name will interminably roll off the tongues of future physicians who appreciate that innovation and its use on a daily basis.

To think of the lives saved by one’s own innovation is quite profound, but many medical trainees and physicians have no idea

who to credit for the amazing innovations they are lucky enough to use each day, many of whom are former Johns Hopkins employees. In researching the origins of the interesting names behind some of my favorite surgical instruments, I gained an appreciation for the vital role played by numerous Johns Hopkins physicians in the development of common surgical tools.

One such instrument is the surgical clamp. Surgeons use clamps for nearly everything — to stop a bleed by closing off a vessel or often as extensions of their own digits. Two clamps that are constantly called for are named the Kelly, after Howard Kelly, and the Halsted, for William Halsted. These two men made up one-half of the team of Johns Hopkins physicians often referred to as the Founding Four, who were famously recruited to the hospital based on their impressive qualifications and medical careers by the trustees who funded its construction. 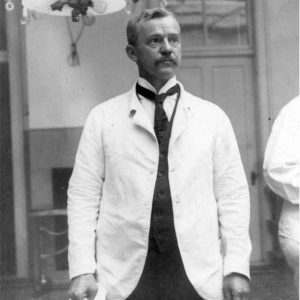 Kelly was a gynecologist and served as the first head of gynecology at The Johns Hopkins Hospital. Besides pioneering surgeries in the field of gynecology, he was responsible for introducing radiation as a cancer treatment, which was the basis of the clinic he pioneered at Johns Hopkins. The version of the short, curved clamp that physicians commonly call the Kelly is one his many contributions to the field of medicine. The Kelly clamp is one of the most common instruments used in and out of surgery.  This little instrument is a mainstay in many medical and surgical toolkits.

Halsted contributed a slightly different version of the clamp, used instead for small bleeders. Halsted was the first head of The Johns Hopkins Hospital’s Department of Surgery and is best known as the first physician to pioneer radical mastectomies for treating breast cancer. His lesser-recognized contribution, the Halsted clamp, sometimes called the hemostat or mosquito, is a smaller, thinner, straight clamp and is used to cut off blood flow at smaller vessels than can be clamped by the Kelly. This simple yet intricate instrument allows us, as surgeons, to be able to stop bleeding, all while doing the least amount of damage to surrounding tissues.

Another famous Johns Hopkins physician, not far removed from the Founding Four himself, is Harvey Cushing, an accomplished neurosurgeon who trained under Halsted during his surgical residency at The Johns Hopkins Hospital. Cushing has a number of diverse medical conditions, syndromes and tools named after him, and even brought blood pressure measurement to America from Italy in the early 1900s, pioneering the field of medical diagnostics as a whole. But the Cushing vein retractor, a tapered, teardrop-shaped surgical tool, is perhaps his most important contribution to the field of neurosurgery. Used by surgeons to delicately move blood vessels during surgery, the Cushing vein retractor has made possible such intricate neurosurgical and other procedures where lymph nodes need to be removed overlying large blood vessels.

These are only a few examples of surgical instruments invented by and named for Johns Hopkins physicians that have revolutionized the field of surgery as it is known today. The role of The Johns Hopkins Hospital and its employees as leaders in surgical innovation first started in the late 1800s, with the establishment of the hospital itself. This spirit of medical innovation has continued to be a priority and point of pride, as the hospital continues to provide patients with the best and most recent standards of care in a constantly changing world.