Monkey See, Monkey Do: Tracing the Origin of Contagious Behaviors 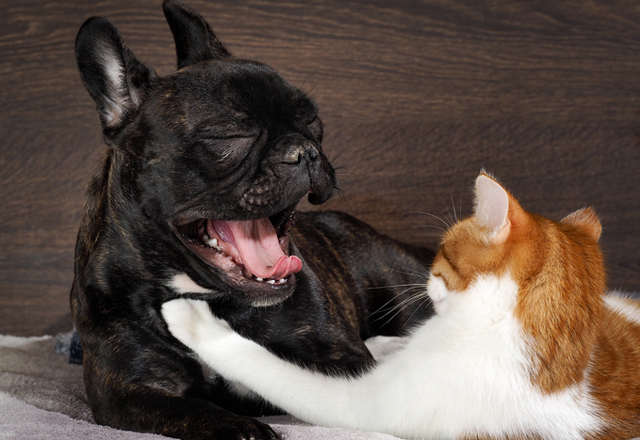 The contagious yawn is a well-known component of the communal human experience that transcends languages and cultures. We joke about it in offices and dedicate Mythbusters episodes to understanding its frequency, and researchers have even shown its ability to pass between species (try yawning in front of your dog or cat and see how long it takes them to follow suit). But there are other contagious behaviors as well: for example, cringing at someone else’s pain, as well as itching and scratching. The mere mention of lice can send hands directly to hair, and observing somebody scratching their head vastly increases your likelihood to do the same. These actions are not in response to any direct itching stimulus, but simply due to verbal or observable suggestion.

Because these contagious behaviors are so ubiquitous, we often don’t realize what strange phenomena they are. If I were to throw a ball at you, you would instinctively flinch and cover your face, but a person standing near you would not flinch as well. Contagious itch, in contrast, occurs because visual signals from nearby peers engage numerous brain regions that then modulate connections usually reserved for direct, reflexive signaling. The root of these actions is generally attributed to “mirror neurons,” a distinct population of cells that fire both when an animal performs a specific behavior, and while observing another animal perform the same behavior. The evolutionary functions of these mirror neurons are still vigorously debated, and they have been implicated in a wide variety of socio-cognitive behaviors including imitation-learning, perception-action coding, and even empathy in humans. However, because thus far these neurons have only been identified in primates, the tools for studying them in a lab are limited.

To more directly examine the roots of contagious behaviors, researchers sought a behavior they could induce and observe in mice, which would allow them to take advantage of the rich genetic toolbox available for this model organism). By exposing wild-type mice exhibiting normal scratching behavior to chronically scratching mice, they demonstrated a strong imitative itch response that had not been previously shown. Importantly, these mice still itched even when they only saw a video of another mouse scratching (something I’m sure we can all empathize with, having yawned or scratched in imitation of a character on TV).  In these “imitating” mice, the authors found gastrin-releasing peptide (GRP) positive cells in a region of the brain called the suprachiasmatic nucleus (SCN) were more active during the itching behavior. Although the SCN is most often studied in the context of its role in pace-making in the circadian rhythm, these cells also receive direct visual input, and the authors hypothesized they may be acting as a relay station between visual information and behavioral response. 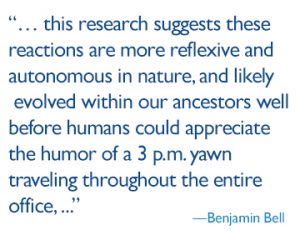 The authors went on to apply cell-type specific targeting, which allowed them to activate and inactivate GRP+ cells using a variety of advanced molecular biology techniques. By working with mice genetically engineered to express either a light-inducible or light-repressible protein only in GRP+ neurons, the authors were able to specifically activate or inactivate only the GRP+ neurons by exposing them to a specific wavelength of light (called optogenetic manipulation). They then showed that specific activation of these neurons resulted in a significantly increased scratch response when the animal was viewing another scratching mouse, while optogenetic silencing or ablation of GRP+ neurons resulted in a significant decrease in this imitative behavior. By demonstrating both positive and negative control of this behavior through GRP+ neurons, their role is shown to be integral to contagious itch in mice.

These findings point in an interesting direction by demonstrating a hard-coded, biological signal for mammalian contagious behaviors. Often, yawning after someone, or “feeling someone’s pain,”  considered an empathetic reaction, involving higher cognitive functions.  But this research suggests these reactions are more reflexive and autonomous in nature, and likely evolved within our ancestors well before humans could appreciate the humor of a 3 p.m. yawn traveling throughout the entire office as if carried on the wind.

1 thought on “Monkey See, Monkey Do: Tracing the Origin of Contagious Behaviors”