A Brighter Image: Peeking Into the Macaque Brain

Each Tuesday, I read the New York Times science section over a cup of coffee and a protein bar. Last week’s article, “Hunched over his microscope, he sketched the secrets of how the brain worked,” exhibits the father of neuroscience, Ramon y Cajal’s, 19th century drawings and elucidations of the neuronal interconnectivity that wires our brain. He understood and predicted fundamental aspects of neuroscience prior to the advent of confocal and two-photon microscopy and complex genetic tools.

Now, in 2017, the latest edition of Neuron features “Long-term two-photon imaging in Awake Macaque Monkey” by Ming Li and colleagues from Peking University in Beijing, China. The authors detail their solutions to technical challenges that have prevented successful, long-term, single cell live imaging in awake macaque monkeys. The new techniques featured in the article allow for visualizing individual neurons and dendrites in awake monkeys for months. This advance is revolutionary to the fields of cellular and behavioral neuroscience and enables live access to macaque circuitry, allowing researchers to study higher cognitive function through imaging and recording neuronal circuits in vivo.

The authors combatted these challenges and detailed their surgical and imaging methods in this groundbreaking paper. Their long-term macaque imaging strategy involved two surgical procedures that utilize genetically modified adeno-associated viruses (AAVs) that encode a visual marker, often a fluorescent protein, to visualize a specific protein or molecule. With this methodology, they were able to record activity and perform live imaging in the intact macaque brain. Specifically, they used AAVs to report calcium activity as a read out for neuronal activity while the monkeys performed visualization tasks. They carried out these experiments over extraordinarily long periods of time and published results from experiments conducted for up to four to six months! 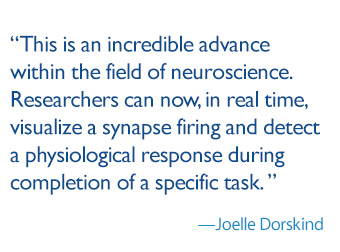 Beyond visualizing neuronal activity, the authors were able to resolve individual dendrites using single-cell electroporation to deliver a mixture of inducible AAVs to express fluorescent calcium indicators. This is an incredible advance within the field of neuroscience. Researchers can now, in real time, visualize a synapse firing and detect a physiological response during completion of a specific task.

Hunched over their microscopes, Li and colleagues are beginning to detail how the macaque brain works. Instead of looking at fixed and stained brain sections, we can look inside the awake monkey brain and understand the firing patterns that underlie task completion. Their work begins to bridge the longstanding gap between genetics and cognition. Where will these technologies take us next?